Finally we made it to the beach, it was so nice to relax and do nothing on the beach for a few days after almost a month of quick moving travel.  We relaxed on Koh Rong off the coast of Cambodia in a resort mostly cut off from the mainland.  We had rearranged our initial itinerary and included Chiang Mai and Cambodia earlier because we were told that in February and March they start burning fields in preparation for the wet season and the air is smoky.  So we had to wait a month for any beach time.  I know poor us. 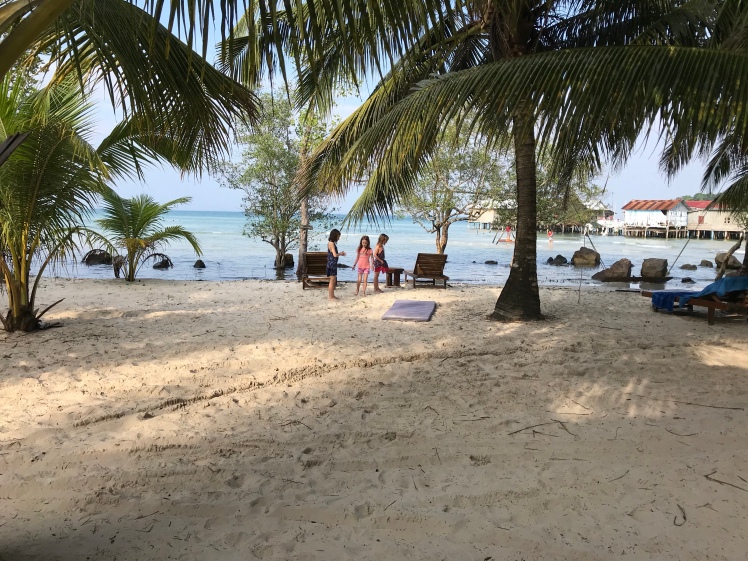 We flew into Sihanoukville from Siem Reap and around midday, it was a bit cloudy and warm.  The airport was small, no luggage conveyor belt but just a free for all for your luggage as it came out.  Must be like what it was in the early days of flying.  Our taxi driver took us to Otres Beach 1, yes there is a second Otres Beach, where we spent the night before heading to the island.  We came on barbecue night at Otres beach lodge, they grilled meat over a charcoal grill which made for lovely steak, which Julie and I enjoyed very much.  The lodge was a lively place on a Thursday and we enjoyed some beverages by the pool while the kids splashed around and talked with other guests.   There was a birthday party and the guests were treated to cake as well.

The next day we took a taxi down to the Royal Pier in Sihanoukville, not much royal about the pier, it was a bit of a bone yard for boats with lots of trash around and the water smelled pretty awful.  We boarded our boat, a 35 foot wooded ferry with about 15 or so other tourist who were presumably going to the same Palm Beach Resort.  The ride was about two hours and the seas seemed a little rough.  Maddy and I took seasickness pills which basically just served to but us both to sleep, we didn’t throw up though.  Once we got to the resort we off-loaded our luggage and made our way to the restaurant bar area where we would take all our meals.  We got a welcome drink and an introduction from Craig the resident dive master and resort personality.  We retired to our rooms for a bit of rest and relaxation.  We had 3 queen beds in our bungalow so we all shared a bed one night or another. 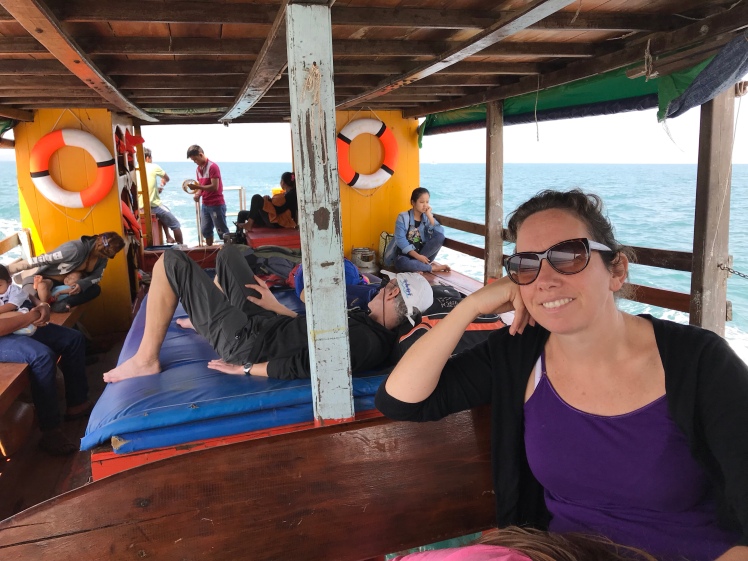 The next day we reserved a spot on a snorkel adventure arranged through the resort and on the same wooden ferry boat that brought us to the island.  We grabbed some peanut butter and jelly sandwiches on our way to the boat to keep the kids from starving while on the boat and we were off on our adventure.  There were about 15-20 other guest and crew on the boat but as usually we were the loudest and most obnoxious.  The first stop was the aptly named coral island, Mirabelle and Julie jumped in with me and swam around for a bit before Julie realized there were sea urchins in the water.  Caroline didn’t want to go in the water at all, it looked a bit too scary for her, snorkeling still needs a bit of work still.  After bringing Julie back to the boat Mirabelle and I swam around together and had a great time.  We found some parrot fish, giant clams (1 1/2 feet wide), coral, sea urchins and lots of sea anemones.  Afterward Mimi proudly announced she was going to be an oceanographer.  Maybe she will take after her grandpa. 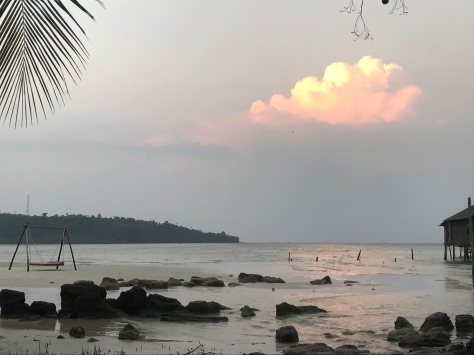 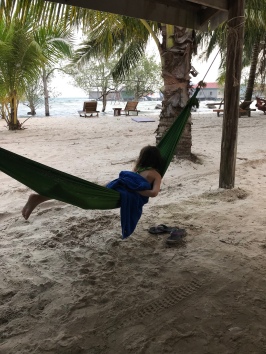 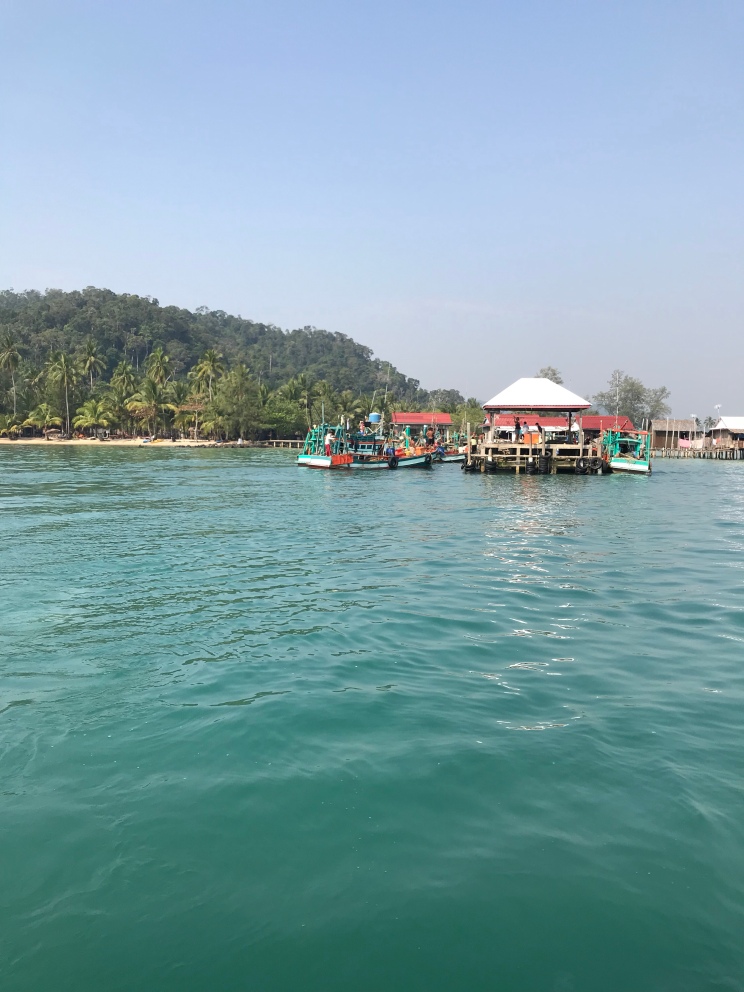 Our next stop was to watch the sunset and do some fishing.  I helped the kids unwind the fishing wire from their coca cola can fishing rods and threw a hook with a bit of squid in the water.  After a bit Craig came over and helped the twins sink their hooks to the ocean bottom and they actually both caught fish although Mimi’s fish was a bit too small and had to be thrown back.  Besides the captain they were the only ones to catch fish out of about 10 people fishing.  We finished watching the sun set over the Gulf of Thailand and motored off into the darkness. 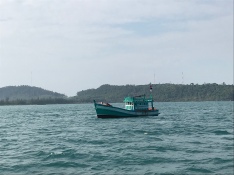 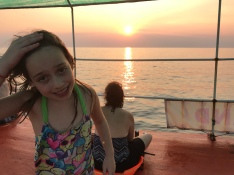 Our last stop was to see bio-luminescent plankton famous on the island, I had seen it once before in the Cook island but never had the opportunity to swim with it.  The kids were really apprehensive at first to jump into dark water in the ocean when it was pitch black but once they heard the gleeful screams from the water from the other swimmers they decided to jump into the water.  There wasn’t much to see from the boat but once we got into the water we found out what they were talking about.  It looked like huge blue and white sparks in the water when you moved you arms that illuminated your whole body.  The girls exclaimed that it was like being a fairy and a mermaid at the same time.  An amazing experience.  Sorry no pictures, apparently National Geographic came and couldn’t get any pictures either.