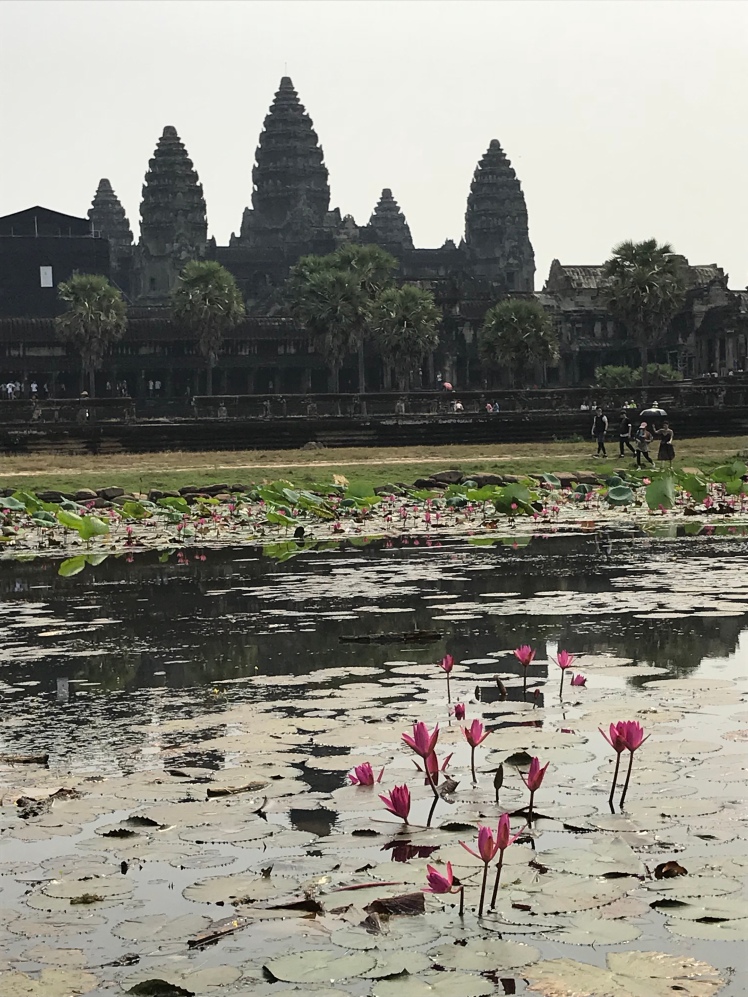 Well probably the most highly anticipated stop on our trip, we arrived in Angkor Watt on a Saturday.  Flying into Siem Reap from Vientiane with a 4 hour layover in Pakse, the weather was clear and the views out the plane window were beautiful first the mountains in Pakse and then the plains around Siem Reap.  Once we arrived in Cambodia we quickly navigated our way through immigration with no problems and we got picked up by Mr. Lucky our Tuk Tuk driver for the week.  As we were leaving the airport I gave my computer bag to one of the kids, who left it on the other side of customs.  uuuhhhgggg, I am glad I noticed before leaving the airport, after negotiating with the airport police, they let me back in to grab it.  Close call.

We headed into town and located our hotel and hopped into the pool for a swim before dinner.  We met up with Julie our real-estate broker from back in Madison, I know small world.  We had a lovely dinner and wandered the night market fending off suggestions by the girls to buy lots of trinkets.

The next morning we met up with Mr. Lucky and headed out to the temples which were 5 miles or so out of town.  We purchased our tickets for entry, we paid only for Maddy and I, the kids were free! $64 for a three day pass.  After purchasing our tickets we headed out in the morning heat.  The Angkor Wat temples were built in the 12th century as a Hindu temple dedicated to the god Vishnu and is a representation of Mount Meru the Mt. Olympus of the Hindu gods.  There is a huge moat around the temple structure and is actually the only temple in the area that has been in continuous or mostly continuous operation since the 12th century.

We loved it, the temple structures were incredibly immense, it is mind boggling to think of the labor and effort to construct the main Angkor Wat temple but then the hundreds of other sites in and around the area.  The intricate carvings in the temples and the beautiful construction makes it such an amazing spot.  I find myself saying “this is straight out of Indiana Jones” quite a bit.  Our driver Mr. Lucky from the airport drove us around on a tuk tuk for the day, he brought us to the best temples and found places for us to eat, he was great and very accommodating.  We were roasting in the 90 degree heat and needed lots of water and enjoyed our lunch in the shade.

We visited three main temples in the inner circle of the ruins: Angkor Wat, Angkor Thom and Ta Prohm.  Each had amazing features, Angkor Wat had the well known sky line; 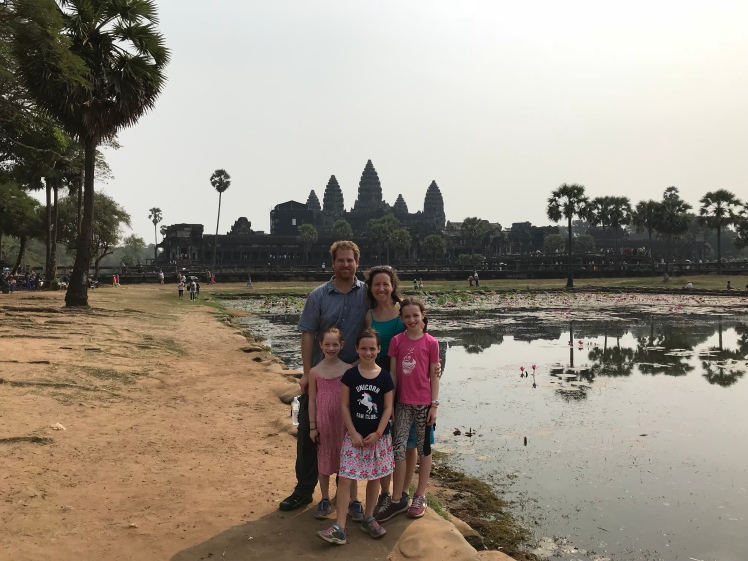 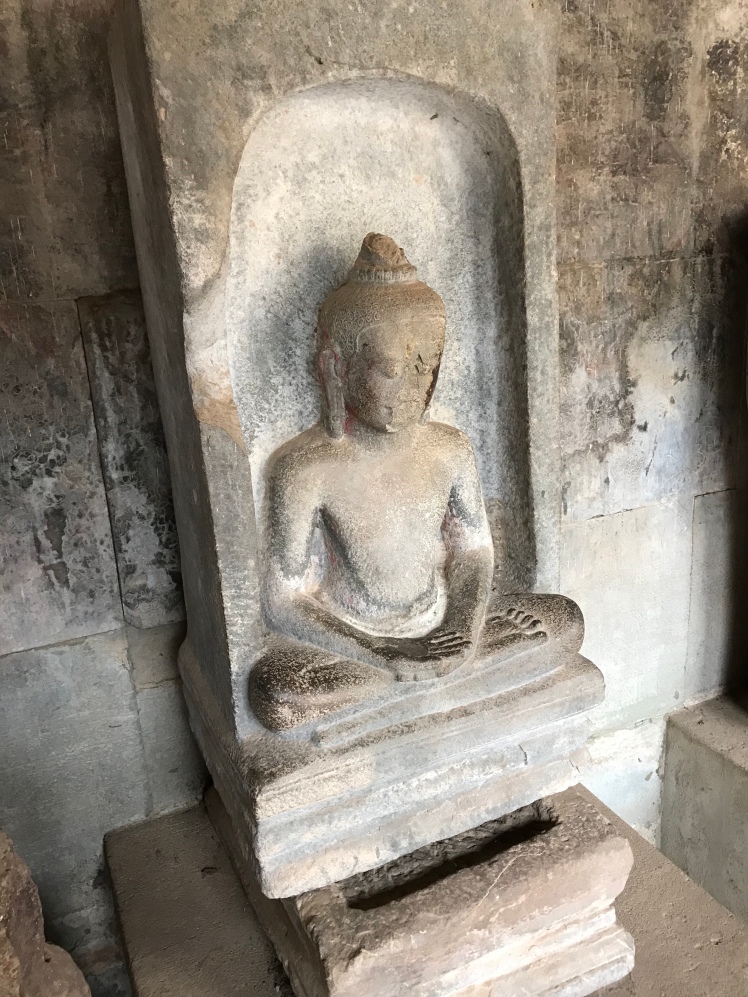 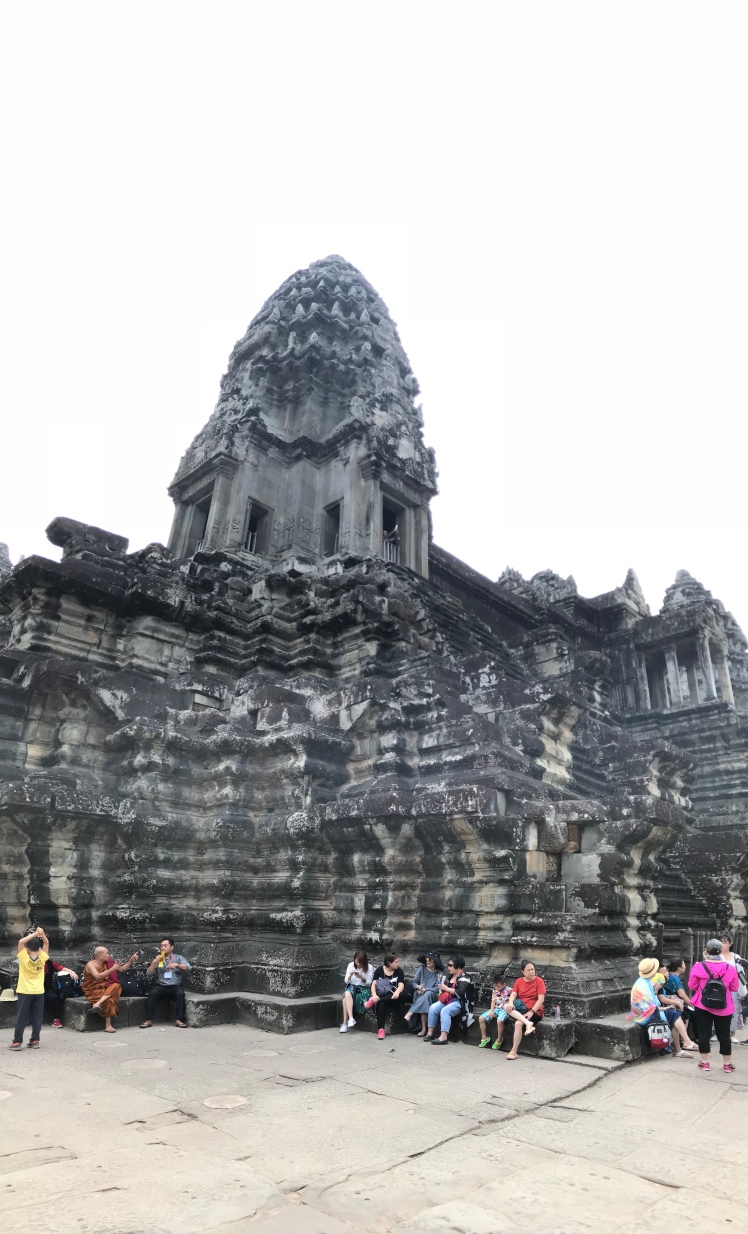 Angkor Thom had the giant faces 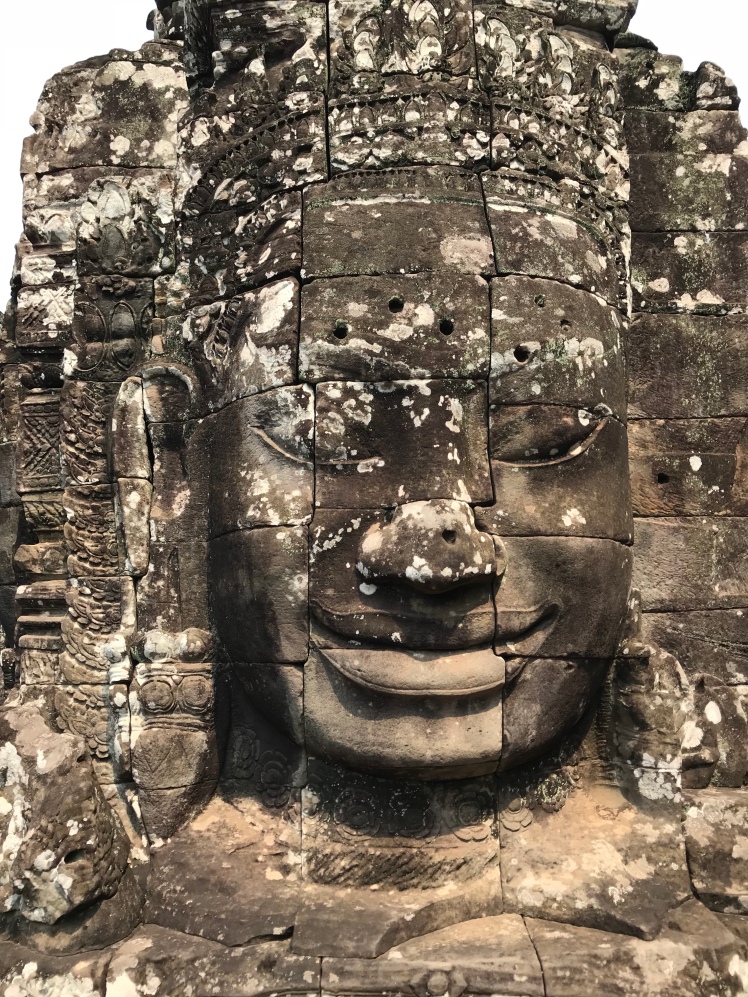 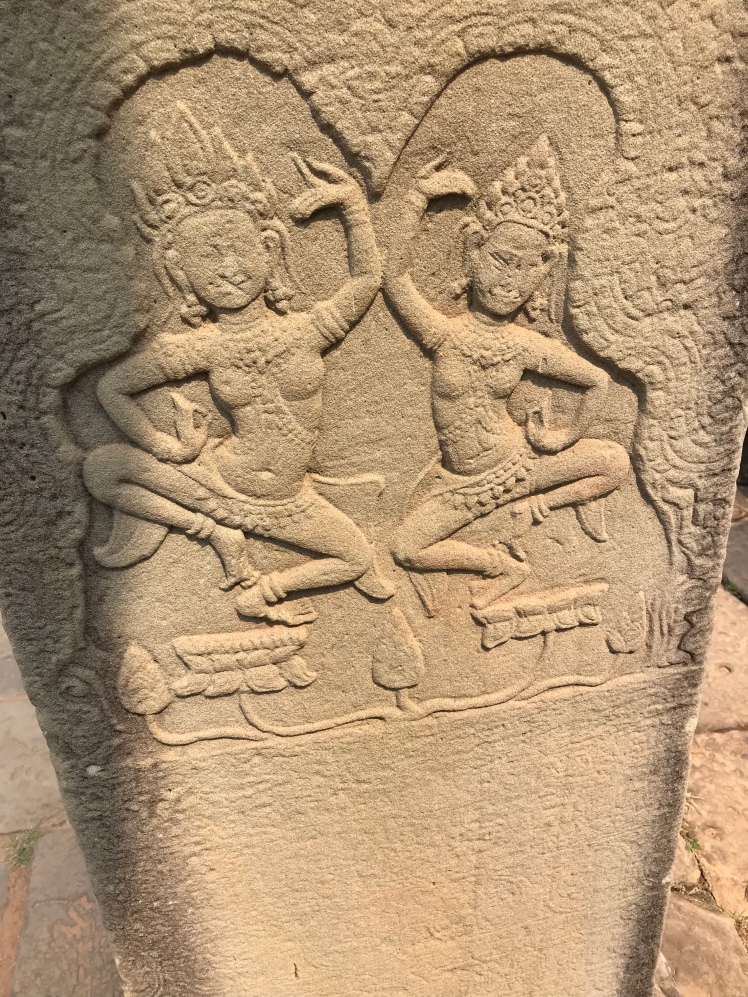 Ta Prohm had the huge trees that grew around the temples. 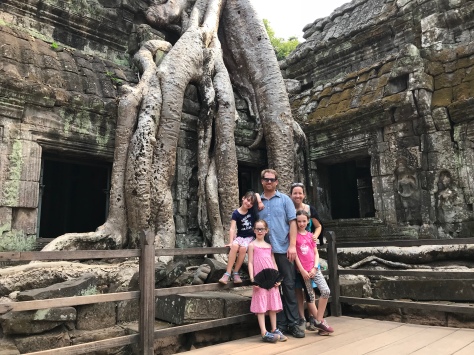 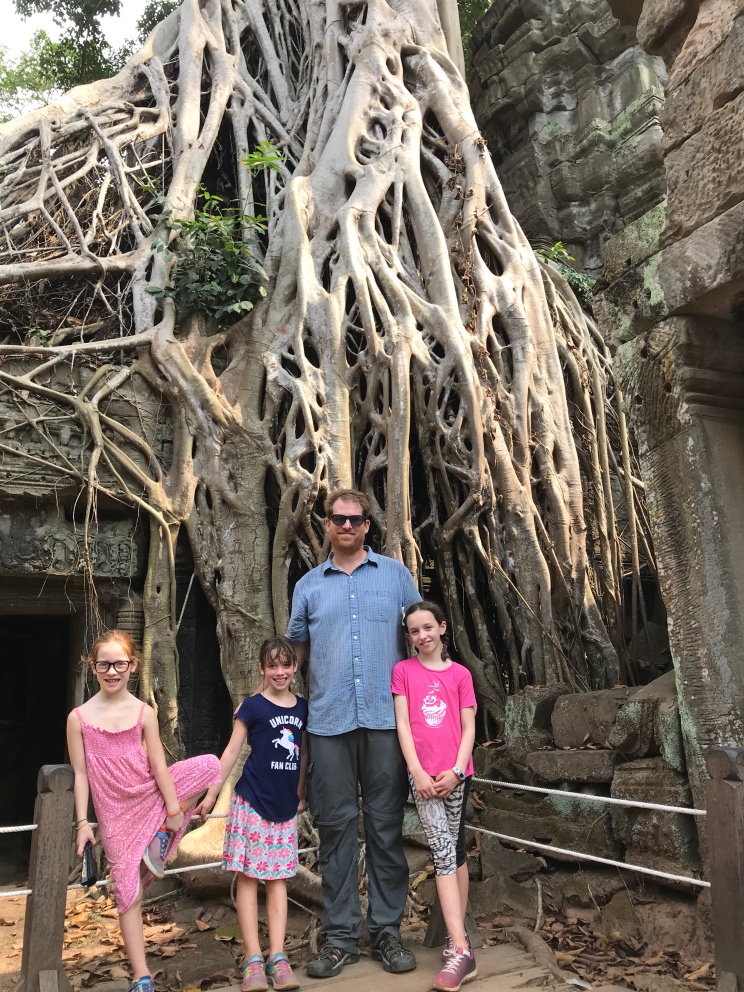 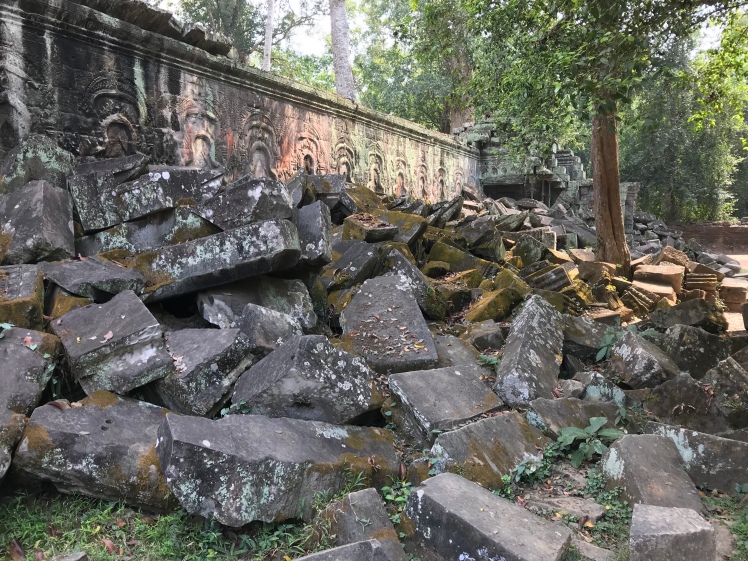 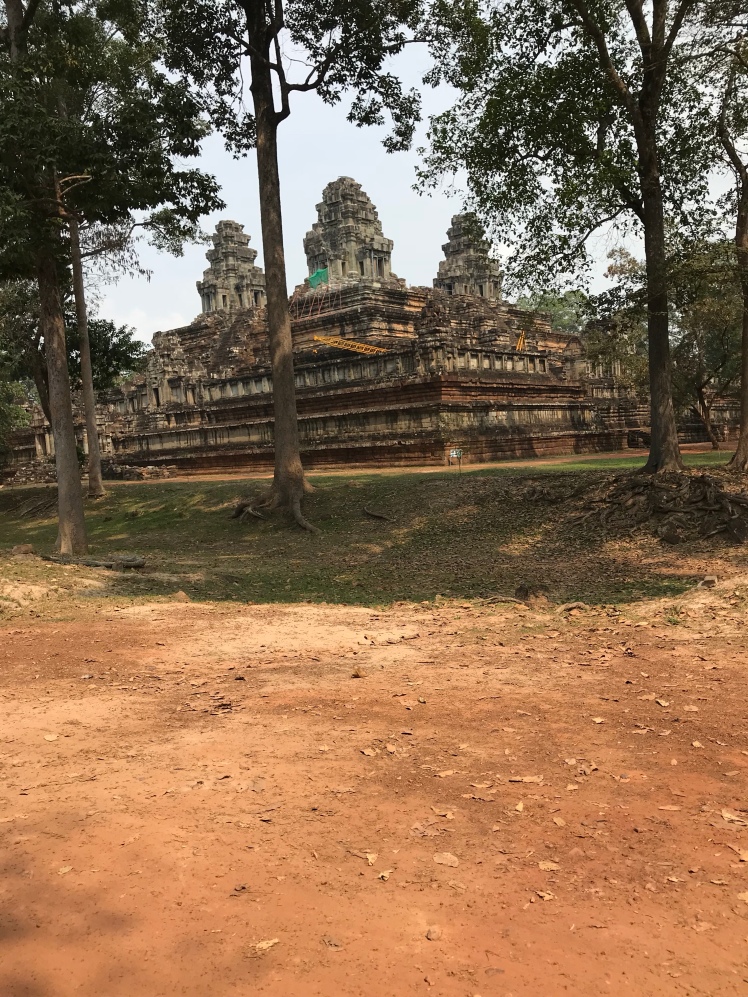