Salvador is the furthest north we are traveling in Brazil after reconsidering the trek up to Fortaleza, so this is it, the remaining part of the trip will be leaving South America.  We arrived in Salvador by ferry crossing the bay from the south, it was a short boat ride but I did need to take off the roof carrier on top of the van to get on the boat, due to height restriction, I glad that I am now a pro at taking the carrier off.  It was a beautiful day and a great way to approach the city. 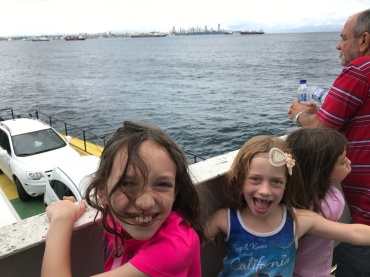 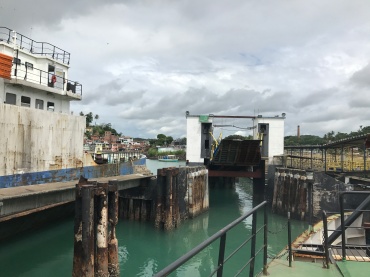 We disembarked and drove to our Airbnb in Barra the furthest eastern point of Salvador where the Atlantic ocean meets All Saints bay.  We got situated in our place and then went out for dinner at a place on the ocean a couple blocks from our house.  I ordered a traditional fish stew called a Moqueca, which was delicious and way more than I could eat because nobody helped me out.  I had leftovers for days, too bad for everyone else.

Salvador is one of the oldest towns in Brazil establish by the Portuguese in the 16th century and served as one of the main ports for receiving slaves from Africa.  Brazil received far more slaves from Africa than did North America and the Caribbean.  Maybe due to this fact or or just my perception there appeared to be significantly more people of African descent in the city and the food also seemed to be more diverse with many more spices and flavors.  We explained to the kids about this history and some of it seemed to sink in, especially when we visited a historical square where the slaves were purchased and sold.

Our first full day was Friday which ended up being cloudy and rainy so we did lots of school and then walked around our neighborhood, visiting the Da Barra light house and Museu Nautico de Bahia part of the historical fort on the Atlantic coast.  We learned that the portugese established a fort at this point in 1534 the oldest fort in Brazil.  We ate dinner at home and celebrated the weekend and steadily improving weather. 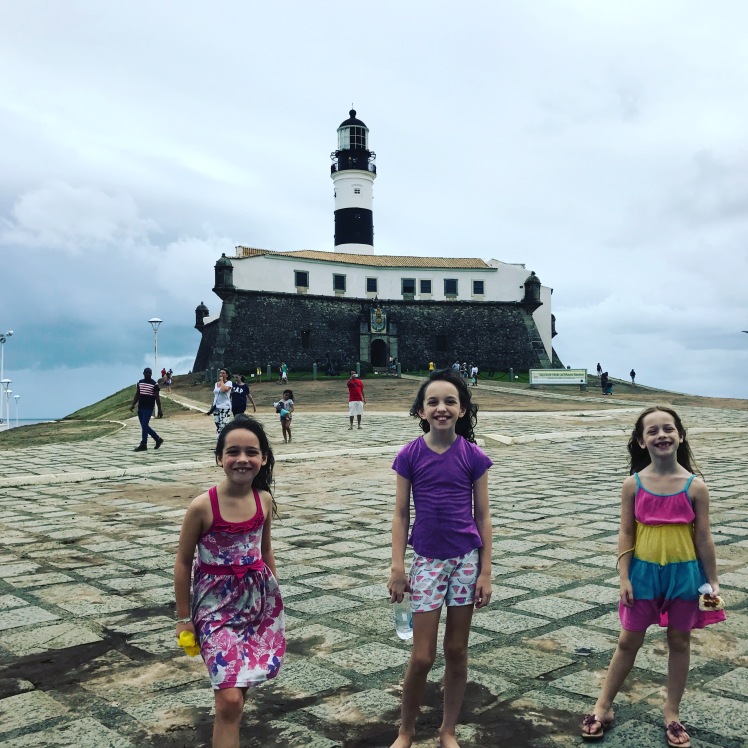 On Saturday we went to the Pelourinho neighborhood and walked around, lots of beautiful buildings, churches and shopping stores lined this area.  We ran into a group of people practicing the Capoeira a mixture of martial arts, dance and exercise, it looked really fun.

We visited a convent converted into a hotel and then rode a funicular down to the waterfront area and then visited the Mercado Modelo.  What a busy day, we went back home and relaxed until dinner. 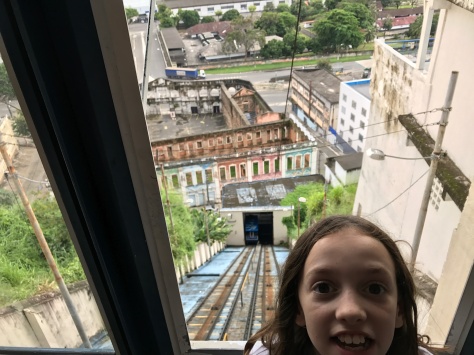 We ran into a drumming core getting rowdy in the square once used to sell slaves.

On Sunday we declared a beach day as it was sunny and went down to Praia do Porto da Barra on the bay side of the Barra and enjoyed sand castle building and beach lounging to our hearts content.  Maddy got a massage from a local beach guy Maddy thoroughly enjoyed it, what is better than getting a massage at the beach?

One Monday we did school and I went to get repairs on the car, I backed into a truck that was illegally parked behind me earlier in the week arrgghh.  The back light was cracked and no other damage; if that is the only damage that we have on the car I will consider us lucky.  In the afternoon we walked along the beach to a Jesus statue that is north along the Atlantic coast, it was good for the kids to get out and walk around a bit.

The next day we traveled north in the city to Forte do Monte Serrat another 16th century fort that was integral in protecting the bay from invaders, we thought it was closed but a soldier answered the door and let us in to poke around, it was beautiful and well maintained.  We strolled along the nearby beach and poked around the neighboring abandoned convent.  I was very hot so we decided that we would head home, before major complaining commenced.  I grabbed some beans rice and chicken at the nearby market and we had dinner at home. 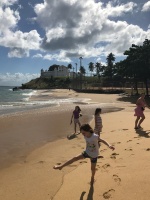 On our last day we did another beach day, after seeing a very poor forecast for the week when we arrived the weather got progressively better and we got sun almost everyday.  Our last day on the beach was interesting as the waves kept getting higher and higher and washing away our chairs and umbrella, at one point we had to chase flip flops and kids into the water.  No harm was done.  The next day we packed up our stuff and headed out of town.  After a lovely week in Salvador, it is officially time to play escape from South America.