Thursday, Maddy worked for most of the day wanting to finish everything up for the week at work, so the girls and I completed school, had some pool time and then went out to complete any last minute shopping for Maddy’s birthday on Friday.  We also procured a chocolate cake, which ended up being larger than I had expected, good to feed about 20 people.  We ate dinner at home and after putting the kids to bed, I started to feel sick, and was throwing up for a good portion of the night, it was awful.  The first real bug that we have had on the trip.  The next day I still wasn’t feeling well but was much better than the night before.

Friday was Maddy’s birthday and we celebrated by giving the girls the day off school. The girls and I gave Maddy gifts and cake at lunch time, we got he a fluffy travel pillow, jewelry and a Brazilian sarong and the kids each got her small trinkets.  We also teated Maddy to a message in the afternoon and some much needed alone time.  At night we took her out to dinner at a restaurant overlooking the ocean and had a nice night out.

The next day I was pretty well recovered and we lounged around and headed out to Praia Tartaruga to catch the sunset over the Brazilian coast.  The beach was pretty skinny although there was a rock that you could wade out to and explore, lots of tide pools and such.  We made it to sunset but the kids were pretty well in melt down mode by the time by the last rays of sunlight. 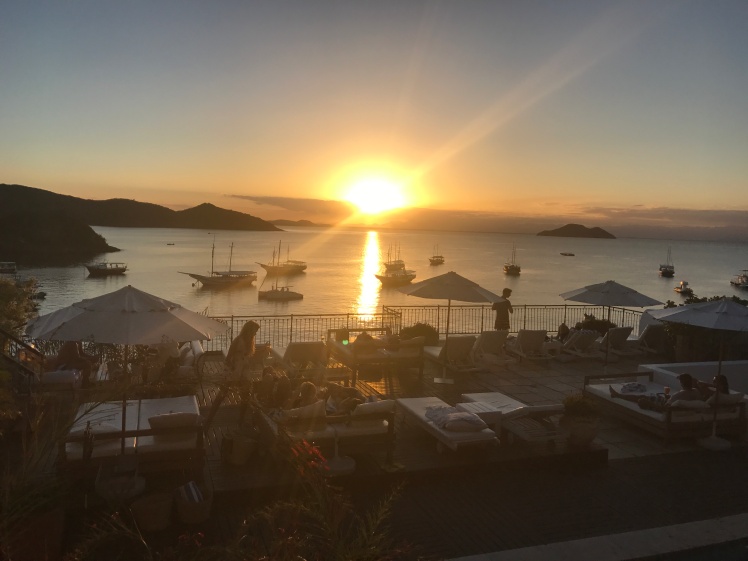 Unfortunately, that night both Caroline and Maddy came down ill.  Caroline threw up Saturday night and Maddy just felt awful and laid on the couch for Sunday.  Such a bummer Mother’s day, we laid low and had pool time and relaxed.  We chatted with both Oma and Nana wishing them happy mother’s day and then enjoyed another beautiful day in Buzios.

Monday was our last day before the two and a half day drive up the coast to Salvador.  We had some more beach time and cleaned up the apartment.  I took a run up to the coast and enjoyed a jog to some beaches that were only accessible by foot.  Buzios is definitely worth more time to explore but we are off to Salvador.  Our second to last city and the furthest north we are travelling in Brazil.  We are now only three weeks away from heading home and are waxing reminiscently about how great the trip has been even though we are ready to be home.