The next morning we got up and quickly packed up the car and went down to the shore to see if we could get a tour of the Capillas de Marmol (Marble Caves).   We found that some of the boats were heading to the Caves despite the wind and rough water.  This was our only opportunity so we bought tickets and hopped on board.  The boat ride out took 20 minutes to get to the caves which are only accessible by boat. 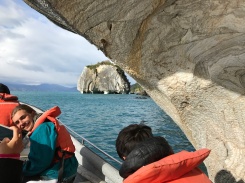 The marble caves were massive rock outcrops of white, brown and gray marble that are eroded where the lake is dissolving the rock over many years and creating large caverns.  The marble layers were folded in some cases making for very interesting designs.  We explored the caves for about a half an hour and then headed back.  The ride back ended up being very rough and took quite a while, everybody was very cold after getting splashed and blown around by the wind.  We learned later that a famous conservationist Doug Thompkins had died a year earlier on the same lake, he was in a kayak in the middle of the lake though with no coat on. 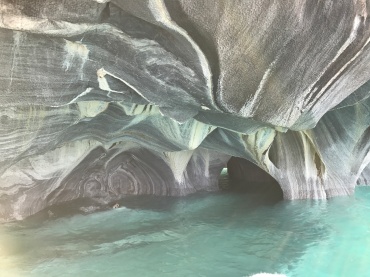 One thought on “Capillas Marmol”