I couldn’t resist posting more pictures of the marble caves; here they are. 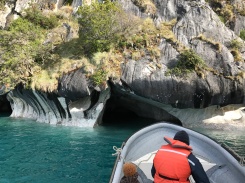 After visiting the Marble Caves we headed out of town toward the border town of Chile Chico, to get there we drove along the south side of Lago General Carrera.  The lake is the largest fresh water lake in Chile and rivals Lago Titicaca in size.  As with the last 7 days or so the scenery was magnificent, the pictures look fantastic but they still don’t do it justice.

It took us a while to get warmed up after the boat ride but we had some lunch in the car and we picked up another woman hitchhiker named Rachel from Britain.  Arriving in Chile Chico we completed our time on the Carretera Austral which has been incredible valley after valley of amazing scenery, termas, volcanos, rafting and great people.  It seems like there are very few Americans in this part of Patagonia but lots of Chileans.  I have to admit that when planning this trip I would have skipped this entire part myself but we had some friend tell us not to miss it and they were right.

We did spot several condors in the air above the lake just before Chile Chico, they must have been Andean Condors and they were huge.

The next day we headed to Argentina and you wouldn’t blame me if I was a bit apprehensive about the border (Frontera) and getting the car through to Argentina, but I decided that we were due for an easy crossing.  That is exactly what happened, we got there early in the morning, cancelled our temporary import permit for Chile and got our passports stamped.  We crossed no mans land and entered Argentina and received our Temporary import permit for 90 days; our customs inspection guy was pretty lax and we were on our way.  Bienvenue Argentina!!!   In Argentina we the landscape changed pretty drastically changing from mountains to deserted high plains.  We had some trouble first getting money out of the ATMs but once we found an HSBC ATM we were in business.  Only 9 hours of driving to get to El Chaltan.