On Friday after finishing school Maddy joined us for lunch and we headed to the Cerra de Bellavista, which is the large hill near the center of Santiago but on the far side of the river from the city center.  We rode the teleferico up to the top of the hill where we ate lunch at the Santuario de la Inmaculada Concepcion overlooking downtown, we took the funicular down the hill and got tickets to the zoo. 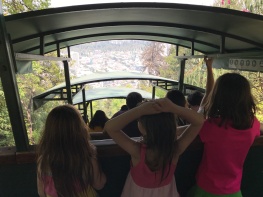 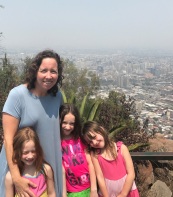 It was at least 90 degrees out so we all chugged water down and walked around the zoo; it was a very quality zoo, lions and tigers, penguins and elephants as well as many other exhibits, not all that much different from an American zoo. We were all exhausted after a few hours so we went back and crashed out for a few hours at our  hotel, the kids on their ipads.  We had dinner out at a seafood place which was nothing spectacular but a good day all in all.

On Saturday we went to the Museo Interactivo Mirador which was an amazing museum with so many interactive exhibits, they had an earthquake room but we missed our appointed time to go see it.  They had a bed of nails which the kids loved so much they had to go on it multiple times.  After staying at the museum for several hours we were all exhausted and  retired back to the hotel and the pool. 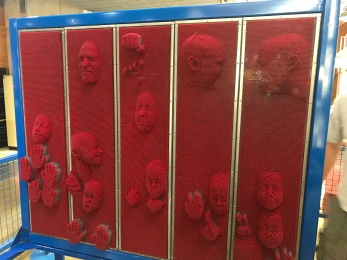