During the next few days we finished school and explored some of the other towns around the lake including Santiago and San Martin.  I concede that diving and climbing a volcano should be on this list but we didn’t quite have enough time for those so here is the list.

7. Explore San Martin – Closer to the Santa Cruz, San Martin was much easier to get to and turned out to be a bit of a hippie commune. Lots of vegan restaurants, drum circles and dreadlocks. Caroline and Maddy went to explore it while the twins and I had a pool day.

6. Hike to Jaibalito – we hiked to the next town over for lunch on one of our last days with our new friends Theo and his mom Talla. It was a beautiful hike over the steep cliffs only marred by the constant whining from children who don’t like to hike. We had lunch at a local shop and then took the public boat back to Santa Cruz.

5. Communal Dining at Iguana Perdida – The local hostel puts together a communal dinner, that anyone can sign up for and participate in. It’s quite fun to chat with all the different people; we met some Danish, Portuguese and even some people from Madison, WI. Soup, pulled pork and chocolate cake was our menu and was a great break from our cooking at home.

4. Swimming in the Caldera – Ever gone swimming in a caldera??? Neither have we before visiting Lago Atitlan. Maddy and I went for a swim on the last day jumping from the boat pier near Casa Eggendal.  The water was refreshing, quite cold at first but we got used to it.  The water was greenish in tint and very clear.

3. Tuk Tuk around Santiago – located is a bay created by two of the volcanoes extruding into the lake, seems like a dangerous place to build a town but the church has been there since 1547 AD and the Mayans had been there several centuries before that. We decided that we would hire a Tuk Tuk to show us around the town, it ended up being really fun and only cost us $100 Quetzales ($14). We visited several places around town including the original church, a graveyard, traditional cloths washing in the lake and Maximon a Mayan deity and folk saint who stays with a different family every year and people come and worship giving alcohol and cigarettes as offerings.

2. Cooking Class – I had promised the kids for Christmas that we would take a cooking class on our trip, so we took the opportunity to visit the CACAP an organization in Santa Cruz that employs 100+ women and teaches weaving and cooking. They look to empower women and help them develop skills. We showed up at 9:00am and cooked for three hours with Claudia.  We cooked tamales, a banana dessert and a chicken dish (tofu for Maddy), we all had a great time and stuffed ourselves for lunch.  The kitchen where we cooked also had incredible views of the lake and volcanoes.  It was an amazing time, I highly recommend it.

1. Ziplining at Reserva Natural Atitlan – We took the kids to this natural preserve just outside of Panajachal on the east side of the lake which had a series of ziplines. When we got there, they asked us if we wanted to do the regular or the Xtremo ziplines?? Xtremo of course!!!  We first had to hike up the hill for a half an hour through jungle, across rope bridges and around waterfalls.  After huffing and puffing our way up the mountain, we finally made it to the top.  The first zip was across the preserve valley and was only a thousand feet or so but the next one was nearly 1 kilometer long and was out over the edge of the lake shore with views of the whole caldera.  It was terrifying; I actually had a pit in my stomach as we flung hundreds of feet over the lake shore.  The kids went with the guides and loved it.  The third zip was nearly as long as the second and took us back into the canopy of the jungle.  We did 5 more shorter zips and finished at the bottom of the preserve. It was an amazing adventure and was quite exhilarating. 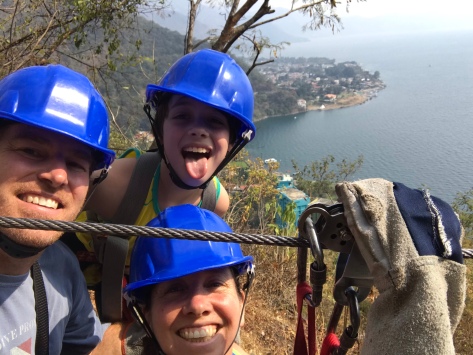