A long thin yellow burst of light was just beginning to peak over the horizon as I began my final accent to Low’s peak the highest point on Mt. Kinabalu.  My timing was perfect to hit the summit at sunrise and despite my fatigue and fleeting regrets for even under taking this climb, I was only several hundred meters from the summit.  The final climb was a tricky scramble up granite boulders, although not a very technical climb there was the familiar white rope to assist that followed most of the way up the climb.  I labored in the thin air as the last few meters past, my mantra “slow but steady” served me well.  Finally reaching the top it was too dark to really take good pictures of the sunrise or the peak but I flashed a photo of the sign at the top and congratulated some of my fellow climbers.

My hands were cold in the 10 degree temperature, the rain from the night before had not helped keep my gloves dry.  Even though there was very little wind, I was keen to get off the summit and down to some place warmer.  The sunrise was getting brighter, as new climbers made it to the summit and engulfing the entire sky with sunlight.  The final peak was a 45 degree climb on one side while the other was a sheer drop so a fence had been erected to prevent any of the tired climbers from falling.  Not many people could congregate at the summit at any one time so most people backed down the slope to find a better spot to photograph the sunrise.  We were lucky to have a sunrise to photograph at all, the rains had stopped only hours before.

I started my adventure about 24 hours earlier catching a van with 11 other climbers, as far as I could tell I was the oldest by at least 10 years.  We had a 2 hour ride west in the state of Sahba, Borneo to enter the Kinabalu National Park.  We got fleeting views of the top of Mt. Kinabalu all the way up the road adding to the anticipation. Once at the park we registered and met our guides and headed to the trail.  The first 0.5 km was a sloppy wet mess due damage to the normal trail, I grumbled as I descended in the valley knowing I would have to climb even higher.

After the first valley it was all uphill and the first 4 kilometer were exhausting but were quite enjoyable and very warm as I passed through several ecosystems including jungle, woodlands and up into alpine taiga.  The trail was sometime fairly difficult to navigate due to loose rocks and boulder strewn trails. 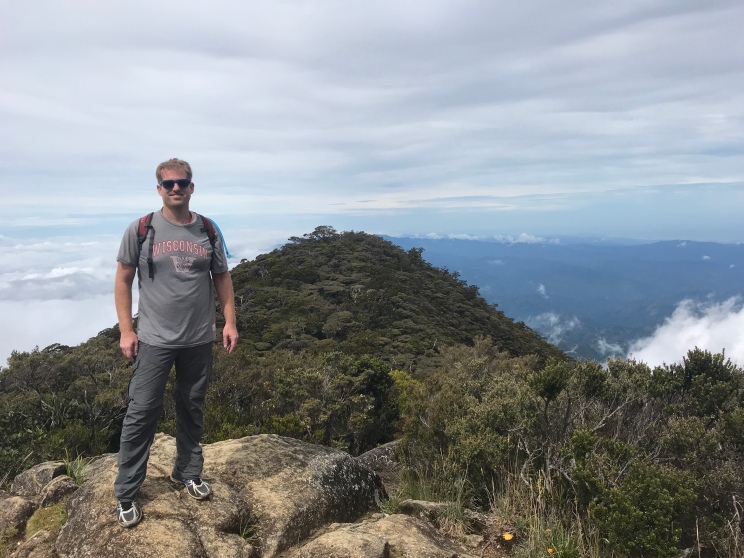 There was quite interesting rock as I made my way up the path the first day gaining elevation up the mountain closer to the granite peak.  There were deep sea sedimentary rocks, conglomerates, turbidities then meta-sedimentary rock such as Serpentine and slate indicative of contact metamorphism as you got closer to the granite.  The final kilometer of the first day ended up being one of the toughest, I must have not been drinking enough water as I got quad cramps and had to guzzle water and push through until I arrived at the hostel for the night.

It took me about 4 hours to hike the 6 kilometers, it was a good thing it didn’t take longer because it started to rain and didn’t let up until around midnight.  The rest of our group and about thirty others ate dinner in a festive atmosphere in the dining room.  There was an anticipation of the summit the next day but everyone was in bed by 7pm or earlier.

Everyone was awake by 2am and we were allowed to begin hiking at 2:30 and headlamps were requisite.  The hike took about 3 hours, and I reached the summit by 5:30.  It was an amazing hike but I was cold and wanted to get off the mountain  .  I bonded with a few of the people in my group and hiked with them on the way down.  We stopped at the hostel on our way down and had breakfast and a well-deserved rest before completing the final 6 kilometers down the hill to the park headquarters.

My knees were extremely sore by the time I was on the last kilometer and really my whole body was spent by the time I got to the end of the trail.  It was amazing to see the kids and Maddy at the park headquarters as they had driven up to meet me.  Overall it was an incredible hike but not one for the faint of heart.  There were a few folks who didn’t make it up the hill but there were also some older folks in other groups who made it up.  Maddy took me and the kids to a nearby hot springs for some well deserved soaking.  My legs are still sore 4 days later but I am sure that will fade in time.