We arrived in Nusa Lombongen on a fast boat from Bali, the boat was packed with about 30 people and luggage.  It was one of the bigger fast boats with about 5 outboard motors.  Maddy and Mimi got a bit sea sick due to the big swells in the straight between Bali and Nusa, it was only 2-3 miles wide but it was pretty rough.  We had to take our shoes off to get on and off the boat so we got our feet a bit wet but it fits right in with island life.

We checked into our bungalow on Scubby Doo beach, I kid you not.  There was a famous surf break off the beach in front of our bungalows so we had fun watching some huge surf come in and some crazy surfers.  The waves crashed on the reef about a ¼ mile of shore so many of the surfers got a water taxi out to the waves.  The rest of the day we just relaxed played in the pool and got to know our new spot for the rest of the first day. 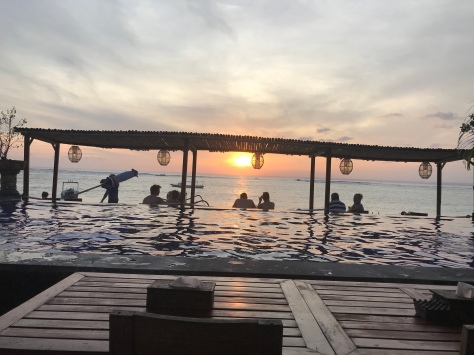 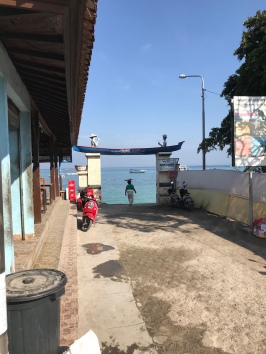 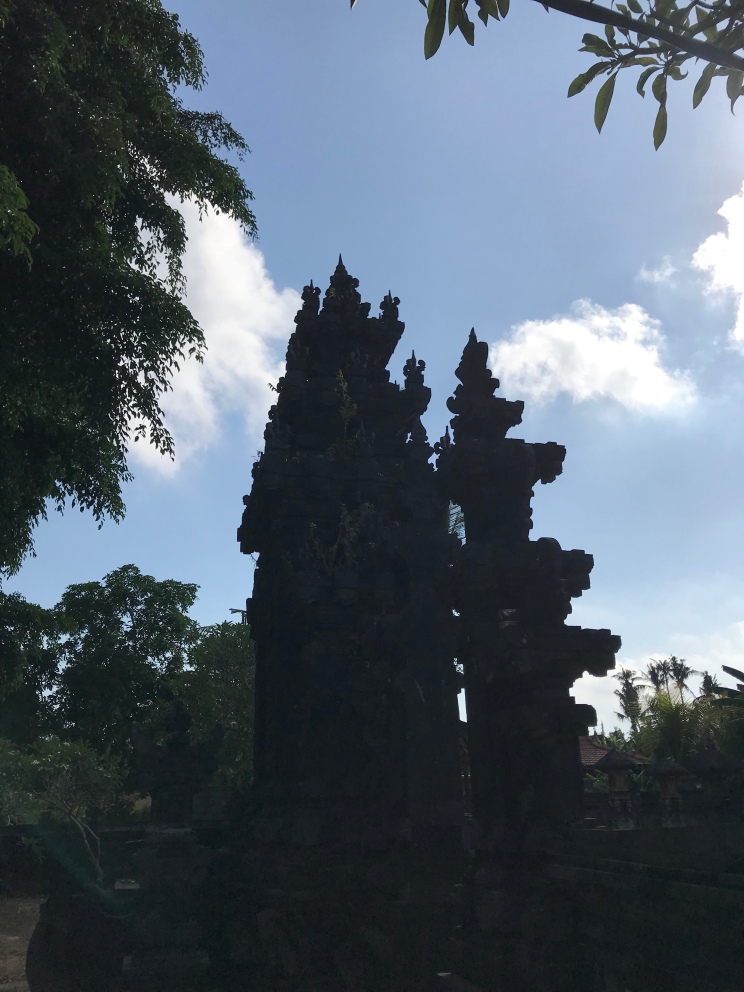 The next day we went snorkeling and stopped at three different spots, the first was Manta Point and it didn’t disappoint.  It was a bit intimidating for the kids as there were lots of boats and crashing waves and deep water but Maddy and I jumped in without hesitation and saw 10-12 Manta Rays.  Some of the rays were within arm’s length of us, I got some amazing videos with my GoPro.  There were a couple times that the Manta’s were coming directly at me and had to move out of the way to avoid me.   I know they only eat plankton but they really look like they were gonna swallow you up. 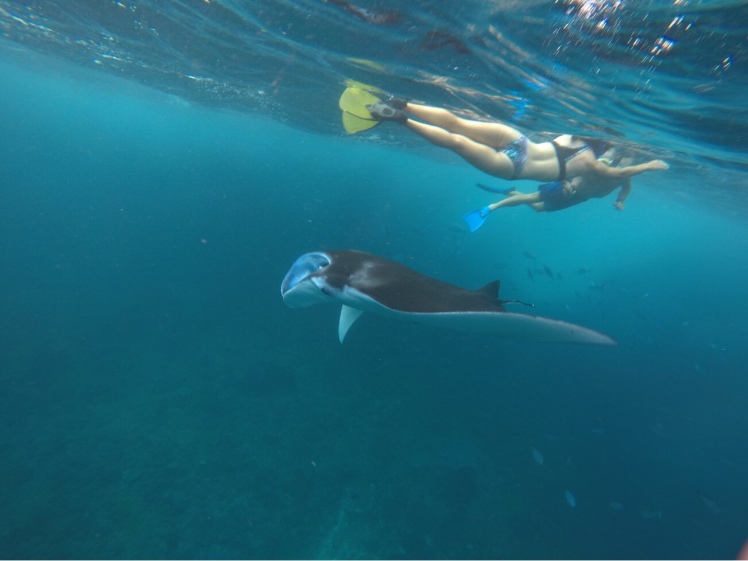 Our next stop was crystal bay, with some colorful coral and crystal clear water, I was the only one in our family who went in because everyone else was feeling a bit sea sick.

Our last stop was a very calm spot near the mangroves on the west side of the island and all three of the girls got in the water and enjoyed the snorkeling.  Might be the first time this has happened.  In fact it took a while to get the girls out of the water they were having such a fun time exploring new coral and finding new fish and playing with the GoPro.

The next day we rented two motor scooters and explored the island starting at Mushroom beach where we had lunch and played in the pool at a resort.

The beach area was overrun by Chinese tourists so we jetted out and went looking for the Devil’s Tear.  It turned out to be a prominent rocky point consisting of uplifted coral that has been battered by the huge waves on the western side of the island.  We were there at low tide so got some of the tide pools and missed much of the spray from huge waves crashing on the shore that we could see from our ferry on our way to the island. 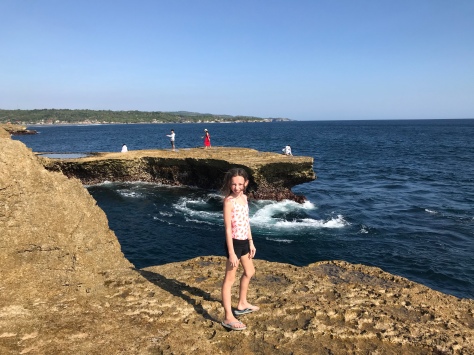 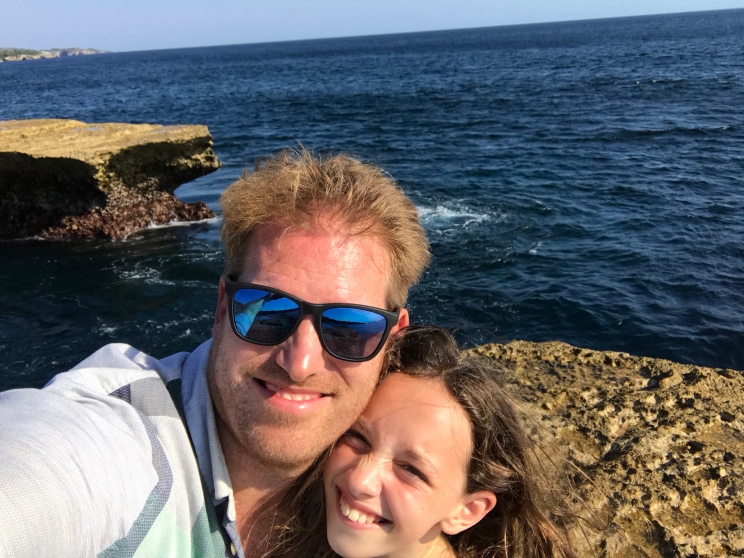 The next day the kids arose early like usual at breakfast and since it was Saturday we took our rented mopeds to the neighboring islands of Nusa Ceningan we crossed over the yellow bridge that connects the two islands and visited the Blue Lagoon and Mahana Point a famous surfers spot and well known cliff jumping spot.  The seas were too heavy so I decided against making any jumps. 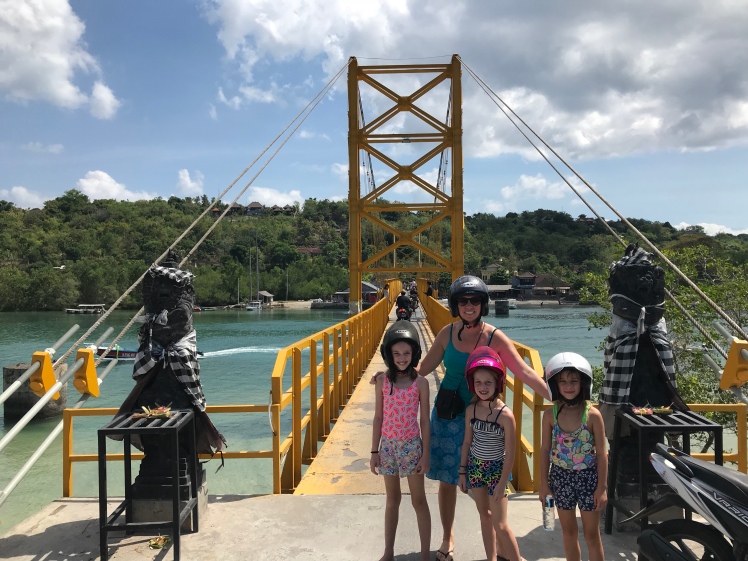 For lunch we found our way to the secret beach, which didn’t seem so secret… there were a ton of people there.  We had lunch at the restaurant on one side of the beach and enjoyed the view before heading home.  The tide was out so we didn’t do any snorkeling but our way home we saw some cool ripple marks left behind by the tide. 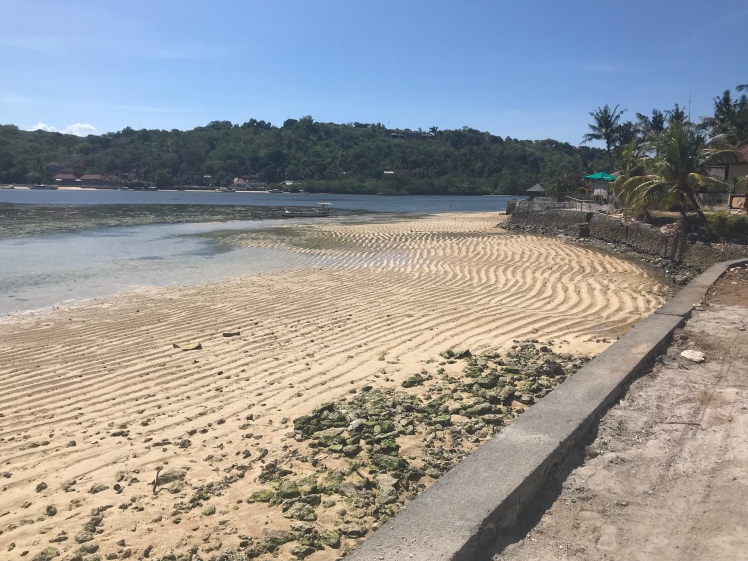 We zipped up to the northeast side of the island before heading home but there wasn’t too much to see, just fishing boats and huts.

There was a party at our hotel that night but we all had to pack due to leaving the next day, so we had dinner and finished our reading for the day.  Our next day was full of travel, including a boat ride (back to Bali), a van ride (to the airport) then two plane rides (back to KL then over to KK).  Adventure!