True we didn’t stay up until midnight for new years but we had just finished a 14 and half hour flight and deleted a day from existence due to crossing the international date line.  We did get an upgrade on our hotel room at the Sheraton, probably the fanciest room I’ve ever stay in.  Corner room with views of downtown Shanghai and two bathrooms.  It’s all downhill from here. 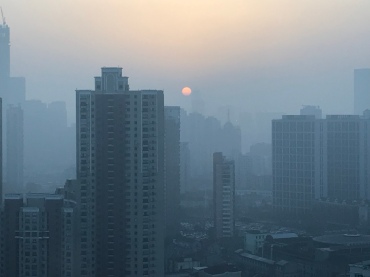 The sunrise the next morning was beautiful, but it was unfortunately very smoggy out.  We checked out of our hotel and took the subway down to the Bund where there is a major warf/walking area at the confluence of two rivers in downtown Shanghai.  The views across the river are the iconic views of Shanghai.  We were getting tired and cranky by the end of the walk so we grabbed breakfast of hot soup dumplings and fruit, I have never seen the kids eat so much food.  Great first meal, hope this is sign for adventuresome eating in the future.

Surprisingly Shanghai seems somewhat spread out to me at least compared to NYC, although I think we have a somewhat skewed view of the city due to the new year’s holiday and the absence of mobs of people.  There were still people who took our photo wherever we went, seem a bit like being a celebrity.  We took a shuttle bus to the airport and boarded our flight to Bangkok.  See you later China.

One thought on “Shanghai”