We were out of Sao Paolo on some large freeways by 11:00, we cruised out of town until we turned south toward the beach.  The road was slow but it was certainly an interesting windy bumpy road through the jungle; we finally made it down to the coastal area before sunset, and it was worth it. It had to be some of the most beautiful scenery in the world.  Beautiful sandy beaches and islands intermingled with green seas and palm trees. 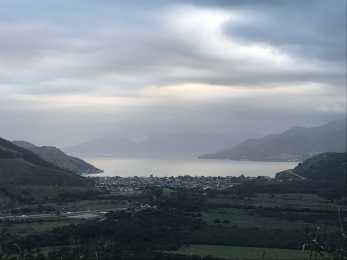 We rented a condo right on the beach lots of availability as it is off season, winter time in the southern hemisphere.  The first day we got there we investigated the beach and the piscina oceanica, an area for swimming that is protected from the ocean but has salt water flowing in through the rock.  There are lots of small fish that live in the enclosure for people to look at that can’t escape to the ocean.

We ate some dinner and headed to bed, the kids went to sleep without a peep.  The next day we all went for a swim in the piscina oceanica and got to use our goggles, the kids loved it, except Caroline was a bit scared of the fish.  Once we got out or the piscina oceanica I went to investigate if we could rent a boat and tour the islands.  We got to the marina just in time as all the tours start at 11, so after a mad dash to get the kids packed and to the marina, we were able to get on a 6 hour tour… cue the gilligan’s island music.

At first we thought we were going to have the boat all to ourselves, but we stopped over in on Ilha Grande and picked up like 10 people.  We were a bit confused as this was more people than our boat could take but we dropped off one person on their sail boat in the harbor and dropped another couple off on another boat tour, they had missed their boat.  So after all that we got a nice tour of Ilha Grande without paying for it.  Our tour was two beaches and one snorkel spot, or so we understood. 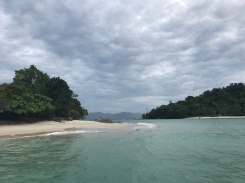 The first beach was very beautiful and isolated, the only people on the beach were from boat tours.  There was some snorkeling that we could do with some coral and fish right along the rocky part of the shore.  The kids were very interested at first and then decided that playing in the sand was more fun.

Our next stop was strictly a snorkel spot near a rocky island near the town of Angra dos Reis.  We all jumped in the water and swam around for 20-30 minutes or in Caroline’s case in might have been 20-30 seconds, she was still afraid of the fish and the potential for sharks, which was zero.  I am amazed that the twins have no fears of swimming around in twenty feet of water with only a water noodles and that was only after we forced them, they are water bugs for sure.  We left island on a high but that came crashing down when our boat motor cut out.  The captain was able to start it back up a few times but it died each time.  The captain poured a whole gallon of oil in the engine at which time I thought we might not be doing so well.  After a few more attempts the engine would not start at all and we were stranded in the middle of the Atlantic (actually mostly sheltered) but the weather did change rather rapidly on us all of a sudden and the poor woman who was sharing the back of the boat with us started to retch of the side.  What a cruise?!??!  After about an hour of much whining from the kids a rescue boat towed us to the shore and they we got a new boat.  We presumed that we would go home as it was getting late and the weather was encroaching on us, but they insisted on taking us to the final beach for a look around.  They then took us to a lunch spot??? It was more like dinner at this point and of course it was closed so we went to another place and had some fries and a caipirinha or two.  Before heading back the the sun was going down and it was starting to rain, and it really came down we still had to head back to Ilha Grande and then back to the mainland.

We were totally soaked by the time we headed to the mainland.  We covered ourselves with towels and hunkered down for our ride home.  We finally arrived at the Marina and had to find someone with keys to let us out; it was the end of a very eventful cruise.

One thought on “Boating around Ilha Grande”