We have heard a lot about the Rio de La Plata (River Plate), there is a soccer team named after it and the Spanish explorers settled beside it to use the fresh water but after looking at maps of the region none of the rivers were named the river plate.  So I was a bit confused, it wasn’t until we got on our ferry to Uruguay that I realized that the river plate or Rio de La Plata is the large bay that extends from Buenos Aires to Monte Video and beyond.  The water in the bay which is open to the ocean is very silty but is fresh water; the bay doesn’t have significant currents and is not very rough so the water in the bay creates a isohaline where the salty water sinks below the fresh water and separates.  As you get closer to the end of the bay and closer to the open ocean does the water mix and become salt water.  I was skeptical that the entire bay was fresh water so once we arrived in Colonia de Sacramento, I tasted the water and sure enough it was fresh water.  The area acts like an estuary and likely varies in salinity depending on the rain fall.  The water coming into the river plate drains about one quarter of the continent of South America.

We set out on Thursday morning very early after getting more than a few warnings about the general strike that was occurring in Buenos Aires.  Most people were treating it like a bank holiday and schools and most business would be closed; we were warned not to drive near the obelisk as it would be barricaded.  We were taking the ferry from Buenos Aires to Colonia del Sacramento in Uruguay, we arrived at the ferry terminal early and had no trouble with traffic at 7, immigration was not a problem either.  We boarded the ferry which took an hour and a half.  I took a little snooze and then we arrived in Colonia.  We had to wait for all the other cars to leave the boat to get our temporary import permit for the car, the border customs people were very nice and helpful, but a little bit slow.

Uruguay was a bit slower paced and the people wanted to make you realized it.  The town we arrived in was a very quaint colonial town, filled with old forts and touristy stores.   We walked around for an hour or so and had lunch.  It was a sunny day and was very enjoyable.  After lunch we drove up the coast to Montevideo in about an hour and a half and settled into our one bedroom hotel, we were a bit cramped after the last few places. 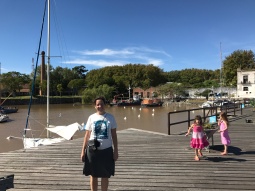