The next day was sunny from the time we woke up, we ate our continental breakfast at the hotel whick included poppyseed cake, dulce de leche and other treats, I think we finally realized the kids are probably getting too much sugar in the morning.  We set off for a hike to the Mirador Cerro Fitz Roy trail.  Our most difficult trail yet with the kids, 8 kilometers, the first half all up hill.  The hike started out with Julie having a huge fit over who got to wear mittens that were brought on the hike.  The rest of the girls took turns whining the rest of the way up the hill and we busted out bars and other food well before we thought necessary but it got us through.  We brought our lunch with us and the ranger suggested a loop at the top to a lake but we were lucky to get to the lookout point.  There were incredible views all the way up the trail of the Rio de las Vueltas and it’s respective river valley.

Then at the top the view of Cerro Fitz Roy was something to behold, worth all the whining and dragging the kids up the hill.  The way back down it was a bit easier but the sun went behinds some high clouds so the temperature dropped a few degrees.

As a reward for finishing the hike we all went and got some ice cream and got some well deserved ipad time.  We packed up our stuff and headed out for El Calafate the next day.

The drive to El Calafate was very easy, all paved roads, we picked up hitch-hikers as this seems to be our default these days.  We entered town and dropped our passengers off and headed off to our hosteria, which turned out to be a good deal for the town, the folks at the place were trying to get us to pay the VAT tax that Argentineans pay but foreigner are exempt from.  They finally relented and we got into our place.  We had a kitchen and living room with beds upstairs but the stairs tread would not meet standards in the U.S. and are a bit scary in the morning.

We ate lunch out in the town and it cost us nearly $100 for a basic lunch ouch, guess we will be eating in.  We grabbed some food at the grocery store and ate dinner at home after walking through town.  Although the El Calafate is very spread out and much larger than El Chalten the down town seemed more condensed into one area.  After dinner we identified a playground out near the shores of Lago Argentino, so we grabbed the kids and walked out with glass of wine in hand.  On our way out we ran into some folks that were staying in our previous hotel lodging.  They of course couldn’t have been nicer, they were drinking wine too and we chatted for a while before being dragged off by the kids to a very nice playground with one of the best that we seen.   The kids played for a while, Maddy chased them for a while and then I took over; we were having a great time until another kid punched Julie in the face, the boy apologized but we decided to leave.  I did go back out for groceries and caught an incredible sunset, just reminded me that we should be doing a better job of watching the orbital bodies in our sky. 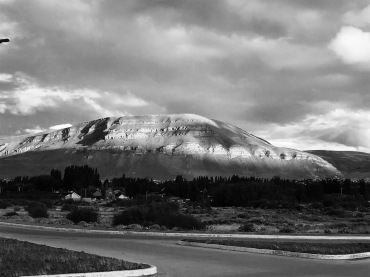 The next day was clear-ish so we ventured out to the Puerto Moreno Glacier, the biggest attraction in this area, the glacier is pushing out of the mountains into a system of lakes.  We were able to approach the glacier from the opposite lake shore and got very close to the edge of the glacier.  The glacier was very active and you could routinely see calving of the of ice off the glacier.  When we were there many small bits came off which made spectacularly loud noises when they hit the water.  Overall the glacier was awesome and probably the largest and most active I have seen.

The glacier is also unique that it extends and retracts pinching off the lake from time to time, this can cause an icebridge to form and eventually when the water breaks through a flood of water comes racing between the two lakes but this only happens every 5-10 years.

The next day was a work and school day, the kids and I went to the glacier museum and learned lots about the history and formation of glacier in the area including a 3D movie.  The museum had a good warning about global warming and its effects on glaciers and other issues caused by warming temperatures.  It turned sunny in the afternoon and Maddy watched the kids after she was done with work so I got some time to wander the town after putting the kids to bed I met up with our friend Pejman from Casa Ludwig that night for a drink.  The next day it rained nearly from morning to night, another good day for working and schooling, we did manage to get out to the local natural history museum (museo – centro de interpretacion historica calafate; http://www.museocalafate.com.ar).  We braved the rain and had fun looking at the dinosaurs that inhabited this area of the world hundreds of millions of years ago, they also had a great exhibit on pre-historical man in the area, much of it was in Spanish so I had to continually remind the kids that humans and dinosaurs didn’t live at the same time.  The kids then reminded me that birds were descended from dinosaurs, they are too smart for their own good sometimes.  We packed up our apartment and set off for Torres del Paine the next day.