On Sunday we left Futa in the morning, we picked up two hitch hikers and we practiced our Spanish.  It is so hard when people talk so fast, Maddy and I are getting better but are nowhere near being conversational, we use google translate a lot, which is indispensable.   The drive was about half unpaved gravel road and half some of the smoothest asphalt roads you have ever seen.  At one point during the drive, we notice that things got really dark, what we didn’t realize that we drove through the partial solar eclipse, we wouldn’t have seen anything if we had realized it because it was cloudy but in hindsight it was a bit strange. 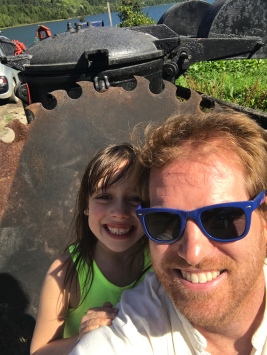 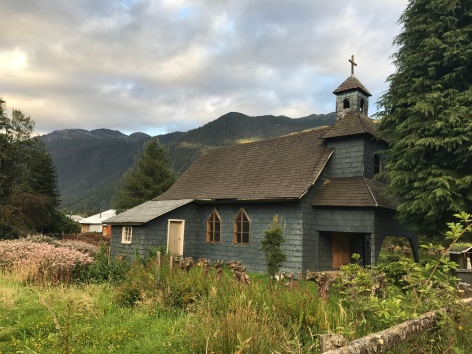 We arrived in Puyuhuapi around 1:30, and settled into our room at Casa Ludwig.  After relaxing for a bit we set out for a hike on the beautiful sunny day at the nearby Ventisquero hanging glacier, what a mistake that was…  We were told that there were several rock falls that had cut the road south of the town along the fjord but that they don’t shut down the road on Sundays from 1-5pm like they do during the week.  So not true, after discovering the road was totally closed we went back to town and let the kids play at a local playground, then once the road opened we sat through a two hour ordeal to go 20 kilometers to the park.  Of course once we got there the park had closed…. Arrrrgggghhh.  We back tracked and had dinner in town and the girls didn’t eat anything so we made mac-n-cheese at home. The only redeeming thing about the night was that we stayed at an interesting hostel that was run by a german/czech woman whose father was an original founder of the town in 1938.  The hostel smelled exactly like my paternal grandmother house in Phillips Wisconsin.  We made dinner and had a fantastic conversation with an Iranian man who lived in Australia and was traveling the Pan American highway. 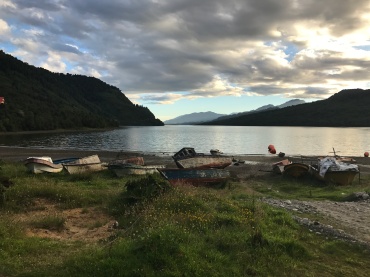 The next day we got up and headed to the glacier and took a boat ride up the lake to get a view of the water fall and glacier, glad we went through the trouble because it was gorgeous.  We spent several hours in the park and then headed off to Coyhaique.  After several days of pretty amazing weather we started getting clouds but unlike early on in Patagonia we could still see the mountains and the amazing scenery. 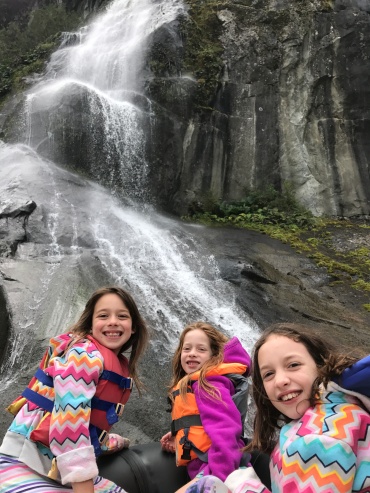