My favorite place we have visited so far, Vina del Mar is a city on the ocean at the confluence of a river that enters the sea.  It has funiculars (large diagonal elevators), a casino, beaches and surrounding mountains, sea cliffs, hidden stair cases.  They should set a James bond movie here.  It is only located an hour and a half from Santiago and the ocean is beautiful.  We rented a apartment just outside the city with a view of the harbor and the downtown.  We had two days to do lots of school work and Maddy got some vchiefing done (don’t think that is a word but I don’t care).  The first night we ate dinner down town, I was unable to locate a tv to watch the packers, probably a good thing as the packer got crushed, we walked along the board walk and got some dessert. 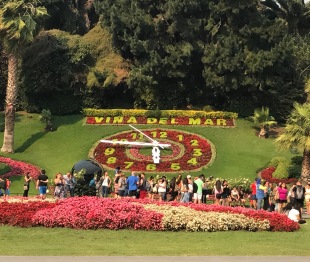 The next day we did schooling, Maddy found a co-working space and the girls and I sought out the funicular.  I made the mistake of walking their without food; we had full on melt downs on the the 10 block walk back to car… such a rookie mistake.  We got empanadas and bananas at a corner store and restored peace to the galaxy.  We then drove around the city for a bit which was a bit harrowing, but we once we got out on the north coast of the city the beaches there were a bit less crowded and had tons of playground equipment so we were in heaven, they had slack lining and a bungie trampoline thing which in the kids words was the best thing they have ever done in their lives!!!

The next day mom joined us at the beach before going off to a couple calls, we played in the surf which is not to be messed with, one wave knocked us all down and I had to grab Julie from being swept backwards.  We weren’t in real danger but the kids were excited about it.  We had dinner on the beach and then headed home to rest.  Couple of long days… tomorrow we head to the capital of Chile, Santiago.  We are starting to experience some smoke from forest fires south of the capital and it is clouding some of our views… I know poor us.  It will be interesting to see how it affects our upcoming travels.