We have finish the second of two trips and have been traveling with the kids for 11 out of the last 18 months.  Our kids typically love to travel but by the end they were tired and craved the comforts of home.  Maddy and I unlike last year were happy to be at home as well.   Here is the final map and some statistics of our Asia trip.

Our trip began in Bangkok but we quickly traveled north because we heard that Chiang Mai was smoky later in the spring.  We followed the Mekong River down into Laos before heading onto Cambodia where we explored Siem Reap and then heading to the beach.  Vietnam was next, we spent nearly two weeks in Hoi An during the Tet holiday.  We then traveled onto Hanoi and Ha Long Bay before escaping to the Malay Peninsula as the spring rains arrived in Indochina.  We stopped in Krabi, Penang, Kuala Lampur and Singapore before jetting off to Bali where we spent a month exploring islands and dodging Komodo dragons.  Borneo was next then onto the Philippines and Hong Kong.  We ended with nearly a month in Japan before flying home near the end of June.  It was a lot of adventure packed into a short period. 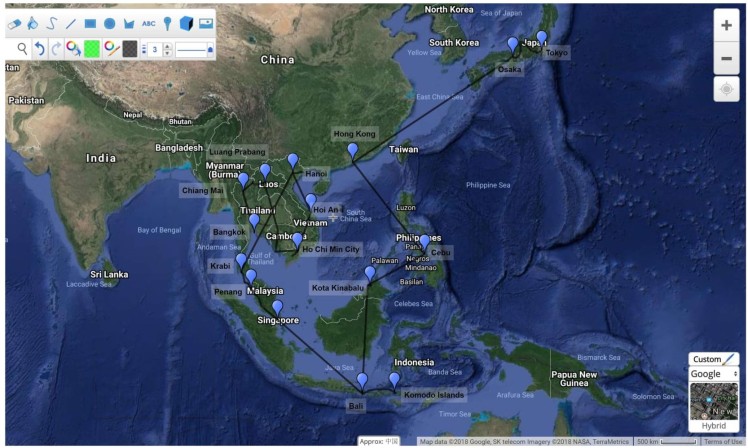 Here are some of the final stats for the trip:

177 days – January 1st through June 26th (for an average of 4.2 days per stop; if you are double checking my calculations I added back in two duplicates locations).  That is some serious fast travel.

19 plane trips (I counted each segment)

13 train trips (all but one was in Japan)

10+ world schooling families that we became friends with.  In South America I think we met 2.

I am not even going to attempt to count the number of Temples, Shrines, Mosques or Churches.  We are just going to go with lots.

We only had one bad bout of sickness in Bali and essentially zero problems with diarrhea which is quite remarkable.  This is especially remarkable considering I like to try just about any food that comes along.  I chock it up to the extensive travel and the build up of good bacteria in our tummies.

I will be forever entranced by Asia in particular three countries stood out for me; Thailand, Indonesia and Japan.  The variety of sights, smells, activities and people were intoxicating.  The future of the Asia seems to be a very bright one.  Most of the fastest growing economies are located in southeast Asia; we saw construction everywhere.  The big cities were amazing, Bangkok, Singapore, Hong Kong, Shanghai, Tokyo and Kuala Lumpur.  They all had amazing sights and attractions.  I was not expecting to have such an easy time communicating, so many people speak English, we had no need for translators in nearly all of Southeast Asia, Japan was another story.

We felt like we completed all the requisite tourist sites on this trip and maybe when we go back we can dig into certain areas and delve deeper into the culture of a particular place without worrying we are missing other places or attractions.

Our plans going forward are to stay in Middleton for the entire school year in 2018/2019 so this is really the end of our adventures for the time being.  Caroline has pushed hard on us to stay at home for her first year in junior high.  So signing off Travel Trotter for the time being.