We arrived at Gili Air which is one of a small group of islands off the coast of Lombok basically a tourist mecca, but the island is completely devoid of internal combustion engines.  No cars or gas powered motor scooters just horse and buggy and the occasional electric powered scooters.  Once we got off the ferry and got our luggage we grabbed the first buggy we saw and set off for our abode for the next week.  We arrived at our chosen place of residence in style as our horse and buggy pulled up we jumped out and grabbed our bags.  We settled into our two cabanas and hopped into the pool.  We were just a block off the beach and the kids could run around the neighborhood and the pool was great.  We enjoyed ourselves and grabbed dinner with the rest of the families once everyone had settled in. 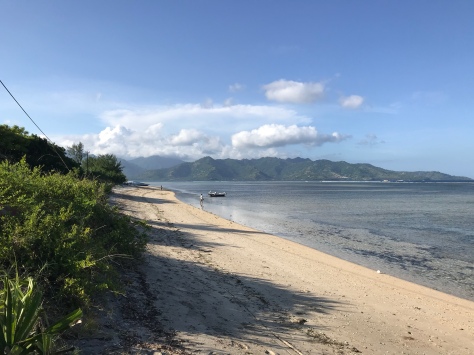 The next day I took a jog around the island, I had heard an estimate of just over 2 km around, it ended up being about 5 ½ with parts through some heavy sand.  I was spent by the end, it was good to get an idea of the perimeter of the island though.  We finished school in the morning then hit lunch and pool time afterwards.  The adults enjoyed the pool as much as the kids and we had a good party, we all seem to be getting to know each other and enjoying company.

The next day we did an organized snorkeling trip, we got all the families to partake and we rented our own boat and hit the water, we went to turtle point to see some of sea turtles on the island.  We were successful and saw 2 or 3 turtles swimming and a few more resting on the sea floor.  The twins seemed to be getting into the action although Caroline has a bit of fear about the sea so she stayed in the boat.  Our next stop was a shallow beach with sea grass (sea turtles favorite food) and we were treated to some turtles in the shallow water and everybody got into the action there.  We grabbed lunch while it was raining then headed to our last spot with about 25-30 of water over some great coral, not too many fishes but we had a great time free diving.

We were exhausted by the end of snorkel trip and relaxed at home.  The new GoPro was working well, the only problems so far were making sure I got my subjects in the frame.

The next few days we explored the island and the families seemed to split up a bit which was good for everyone to get some space.  Our girls were reticent to go to the beach all that much, I think they are worried about, sea urchins, sea lice and jelly fish all of which are not a problem on the island but what can you do.  We did get some pictures on the famous swings they have on the island and we also had a bonfire.  We also spent many hours in the pool and it was good to get some down time and catch up on school.  Other than that we ate lots the food was great.  We seemed to have ice cream and a beautiful sunset every night. 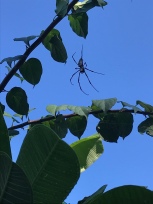 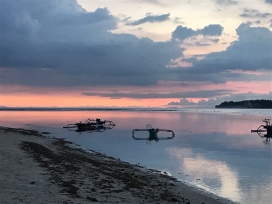 Nearing the end of our time some of the families were talking about a cheap 4 day cruise to Komodo island, we loved the sound of it and joined the planning.  It ended up being a bit more expensive with the five of us in cabins but it was still a steal in my opinion.  The owner of our hotel basically stiffed us on the last day of our 9 days there on the island, and charged us more than we expected on the cruise.

Our last organized activity was a dive trip and the girls even got to go out with us, they snorkeled while we were diving.  We just ended up doing one dive each due to logistics with the kids but Maddy and I actually got to dive together.  We saw some great stuff, lots of turtles, morey eels, great coral and tons of fish.  I post a couple of videos including the second one with Maddy getting very excited about a huge turtle.

Caroline had been asking me to wake her up and go watch the sun rise over Lombok and I had been delaying because who wants to get up at 6:00am to watch the sun when you can see it later??  So I finally relented the last day, we had to be up by 7:30 anyway to meet our ferry to Komodo island.  We got a beautiful clear sunny morning and a I got one of the best photos of the trip.

Mt. Rinjani is the subject of a recent NOVA episode called “Killer Volcanoes” it documents the catastrophic destruction of the volcano in 1257 creating a massive caldera and in the process causing a global calamity including deaths in London England.  If you look at the middle of the picture and see the 4-5 craggy points and project them upwards, you can begin to get a sense of the size of the volcano that collapse in on itself.  We packed up our stuff and headed to Lombok for our epic 4 day, 3 night cruise.