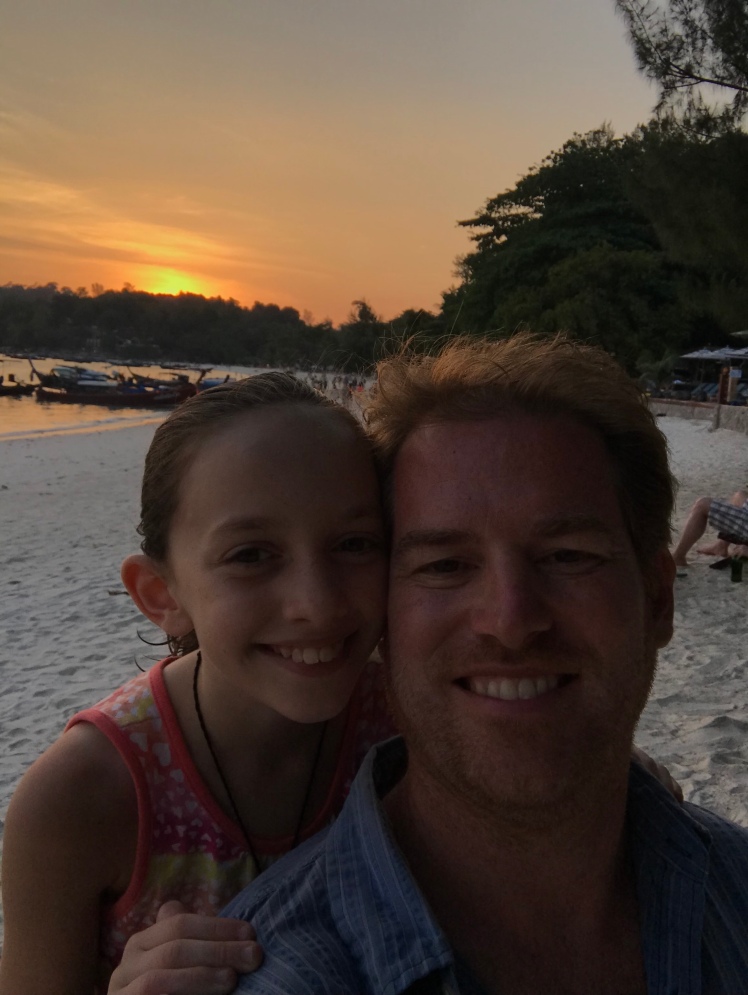 After saying goodbye to our friends we hopped on a high-speed boat to Koh Lipe, it was probably a 25 foot boat with 3 outboard motors.  We made the mistake of getting in line for the boat last and we all had to sit apart from each other and I had to sit in the back of the boat near the motor for a three hour ride.  I had a bit of ringing in my ears and inhaled exhaust fumes for a few hours afterwards but it ended up being just fine.  Our place was only a few hundred feet up the beach but we had to purchase national park tickets and had to endure some pretty hot sun and whinny kids before we arrived.  Our place in Koh Lipe was without air-conditioning which despite the heat it was fine a few fans and a cool breeze off the ocean at night.  The beach was beautiful and there was a great walking street for food, trinkets and dive shops galore.  Very beautiful island in all.

Maddy and Caroline went running on our first morning on the island, they said they did two miles and saw a couple of beaches.  I later ran up the tallest peak until the trail became jungle and decided to turn around.  I did get an idea of the geology; it appears to be a big chunk of granite sticking out of the ocean.  There were lots of rounded sugar loafs or rounded granite lumps about twice the size of people.  There are several other small islands in the area but many of them are not as populated as Koh Lipe and are likely to be part of the protected National Park located in the area, preventing much development.

I went for a snorkel in the afternoon and found a bit of coral and fish just off the coast, there were sea urchins, so the girls would not go near the water.  We found a pool at a fancy resort next door and strolled over in the afternoon for happy hour and enjoyed a swim.  We grabbed some street food and NYC style pizza for the kids around dinner time, then Maddy and the twins went shopping for birthday presents while Caroline and I headed for home.

The next day Maddy went scuba diving and I completed school with the kids.  Maddy finished just around 1 and then joined us for lunch.  Maddy said she enjoyed the dive and saw lots of fish even though her visibility wasn’t the greatest, but no sharks or stingrays.  We enjoyed some beach time and ipad time before heading to our favorite pool spot.  For dinner we went to a local grilling place and had roasted crab and grilled fish, I inadvertently ordered some Tom Yom goong (with shrimp) that was blisteringly spicy, it didn’t go all that well.  The next day I got a chance to dive in the waters around Koh Lipe and had a lovely couple of dives despite my dive master giving me trouble that I was breathing too much; that’s what happens when you are 6’3” and 230lbs.  My dive master was probably no more than 120 lbs.  Oh well, I did see some great coral, a cat eye shark and a sting ray.  Our last night we took in an amateur fire show and then packed our things for the ferry to Malaysia the next morning.

One thought on “Koh Lipe”