Friday night after meeting up with Julie’s friend Marta who was biking across Vietnam and of course our favorite Brits, we headed to the 3 dragons restaurant and had a huge feast with a few bottles of wine.  Quite a memorable meal with great people, one of those meals with great friends that you don’t forget for a while.

Saturday we visited the Marble Mountains only a twenty minute van ride away from Hoi An with our group of 10 (us, the Brits and Julie) that seems to be together as much as possible these days.  There we visited an area with 5 marble mountains poking up out of a flat sandy plane near the ocean.  Each mountain was named after a different primitive element: water (Thuy), earth (Tho), fire (Hoa), wood (Moc) and metal (Kim). We visited only the Water Mountain the largest and I would image the most developed.  There were at least 3 or 4 major caves and plenty of minor ones all of which had various statues of Buddha including a woman Buddha.  Beautiful pagodas were built on the mountain to house the monk as well.  Although not a UNESCO site the mountains were protected by Vietnam as a site of historical and cultural value, so we couldn’t take any of the beautiful marble, not that we have any room in our bags anyway. 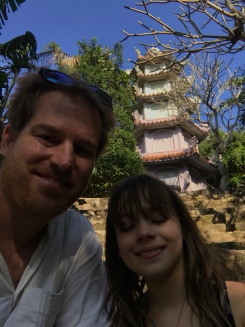 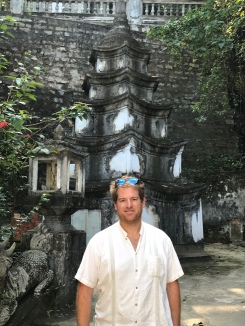 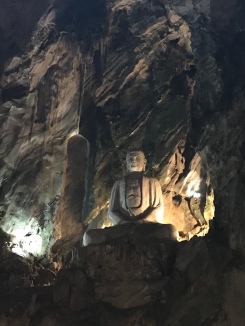 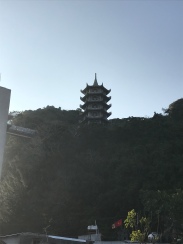 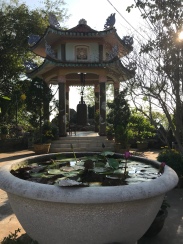 The mythical legend of the Marble Mountains goes that they were formed when a dragon landed on the beach near De Nang and left a dragon egg which after 1000 days and nights hatched into a beautiful woman.  The mountains are the remains of that dragon egg poking out of the ground.  Either that or the eroded remains of a metamorphosed limestone formation.

Sunday we sadly said goodbye to Julie (our realtor) who was off to visit Dalat before heading home.  We were on our own for the day and organized a ride to Hue another UNESCO site about 3 hours away from Hoi An, where the Imperial Capital for Vietnam was located between 1800 and 1945.  On our way there we drove over the famous Hai Van Quan pass a strategic mountain pass along the coast.  The views were spectacular, but the ancient arches and buildings were a bit run down. 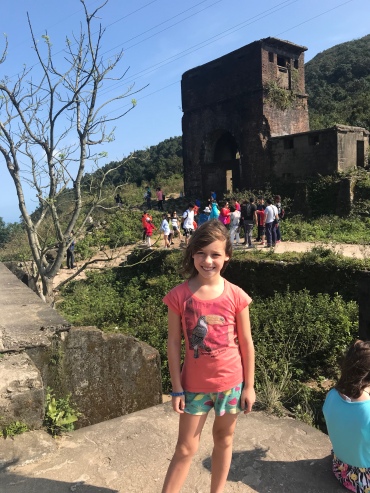 We arrived at the city around 11 and drove to the citadel and entered the forbidden city, similar to the one in Beijing we were told.  Maddy the kids and I walked around the city for about an hour but the kids were getting hungry but our ride was nowhere to be found and there were no places open for eating due to Tet holiday.  We also forgot our bag full of food, so we had some cranky kids.  Once we found our ride with our food bag we were able to right the hangries and move on. 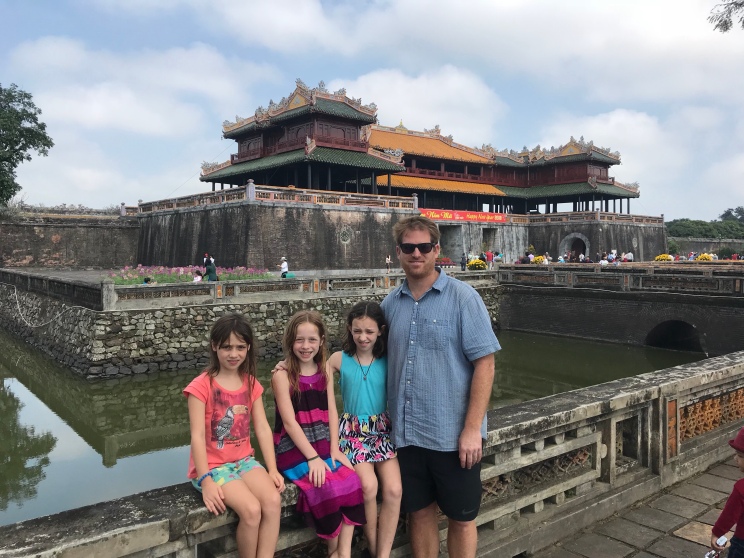 Our next stop was the Pagoda of the Celestial Lady an ancient pagoda built in 1601 on the banks of the Perfume River.  It was a beautiful spot on a bluff near a bend in the river.  In the Vietnam war era (they call it the American War) the pagoda was also a hot bed of resistance to the communist government which oppressed the Buddhist religion.  They have on display the car in which the monk Thich Quang Duc drove to an intersection in Saigon where he set fire to himself in a display of self-immolation which brought the plight of Buddhists to the attention of the international community. 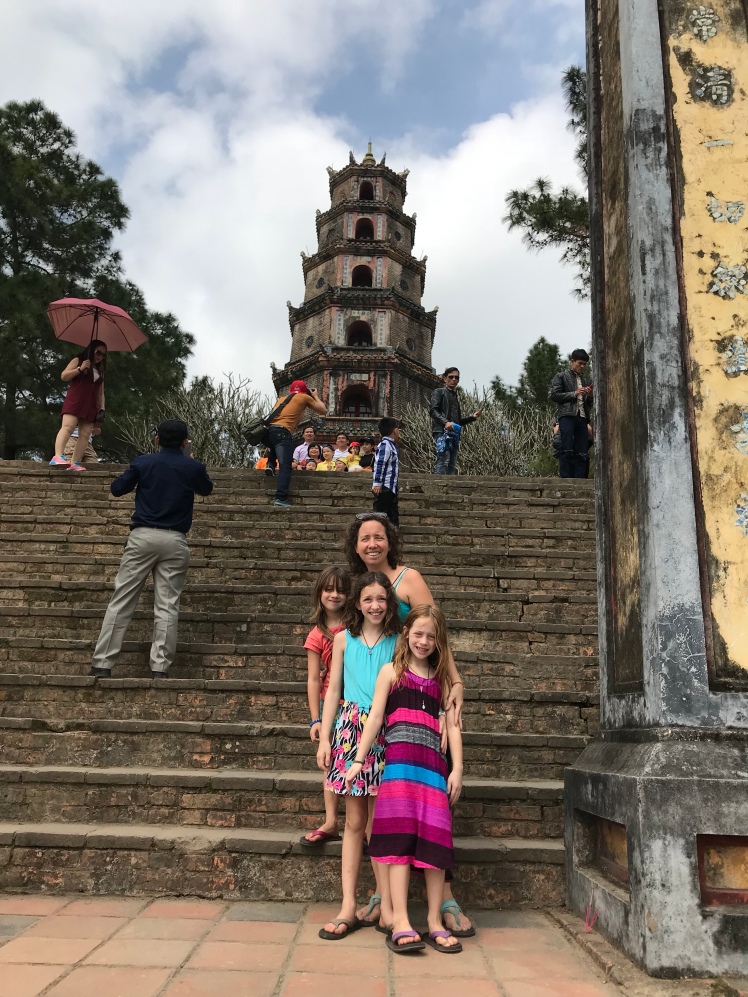 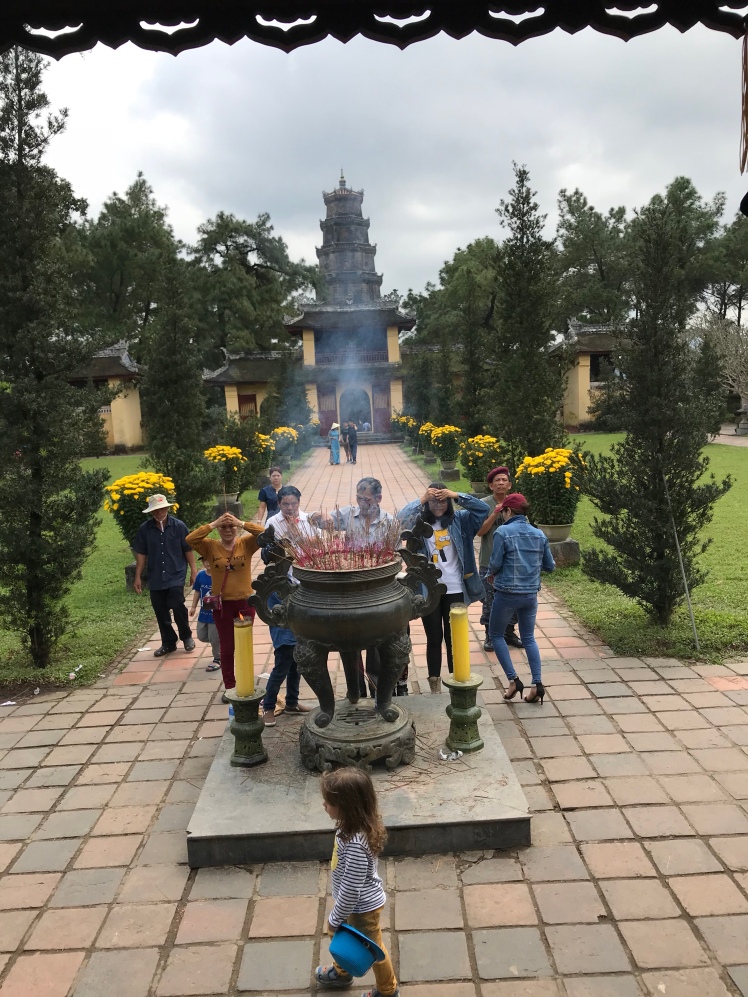 After visiting the Pagoda we began driving back to Hoi An and on the way back finally stopped for lunch.  It was probably one of the most authentic or least westernized meals we have had.  It was rice noodles, thick pork/bacon slabs and veggies.

Afterwards we went home, Seamus and I got to have guys night out; we certainly had fun roaming the town of Hoi-An and improving Irish-American relationships, not that it needed any help.

The next day we met up with Seamus, Pamela, Mia and Eli for lunch and then afterward biked to a well-known pottery making area along the river near Hoi An.  The kids had fun making bowls and making designs in clay.  Although there was some sadness over not being able to take the creations with us but really, we had no way of transporting them.  We visited a pottery museum and then hopped a boat back to the center of Hoi An for dinner.  After getting the kids home to bed safely it was the Maddy and Pamela’s turn to have girls’ night out. 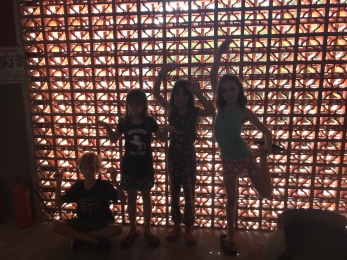 Tuesday we met up with Pamela and Seamus again, this is becoming repetitive right?  Well we seem to have a ton of fun together and the kids really get along in fact Julie and Eli are really a bit attached to each other and Caroline and Mia are inseparable.  The adults have lots of fun too; we all have similar temperaments and it’s just easy to hang out.  We had lunch at their hotel and had a lovely pool party in our swimming costume’s as the Brits say.  Then had dinner together.

Wednesday we met up at Jack’s Cat Cafe for lunch and petting of cats.  The place is a refuge for cats in Hoi An, they have about 70 cats and 2 dogs; all were rescued and nursed back to health.  We met up with another world schooler Kristen and her two daughters.  After the cat café we all had more pool time then Pamela and Seamus had their date night.  I went home with our daughters and Maddy took Eli and Mia to their hotel to watch movies.

The next day we had to pack up and say goodbye to the new sunshine homestay and our new besties the Gallamoys.  Off to Hanoi and Bai Tu Long Bay.

One thought on “Amazing Vietnam”