Our third and final encounter with the Mekong was memorable both for the problems we encountered and the actual tour we took on the river.  Our tour departed out of Ho Chi Minh City on a Saturday five days before the Tet holiday.  We organized the tour with our hostel and departed around 8:00 in the morning but we were quickly delayed by both traffic and a group of about 10 Asia men with Australian accents that had to be kicked off our bus.  The group of young men had been out drinking the night before and were not in any condition to take a tour.  One poor guy had thrown up within 10 minutes of being on the bus.  So once our guide had dropped them unceremoniously on the side of the road we were on our way.

It was about 1 1/2 hours to My Tho where we crossed the Mekong and several large islands.  We were told that it was about 1.6 kilometers across the river at that point, much wider than when we encountered the river in northern Laos.   Our tour began with a tasting of honey and fruits with some local kumquat/honey tea.  We were then treated to some local music before a brief ride on a paddle boat.  The boat ride was through a small canal, with palm trees and houses on either side; a very picturesque little jaunt through the jungle.  We finished at a coconut candy maker, where we tasted the local sweet candy, we were amazed they don’t use any sugar.  The kids also were brave enough to wear a large snake around their neck, the look on Caroline’s face is priceless. 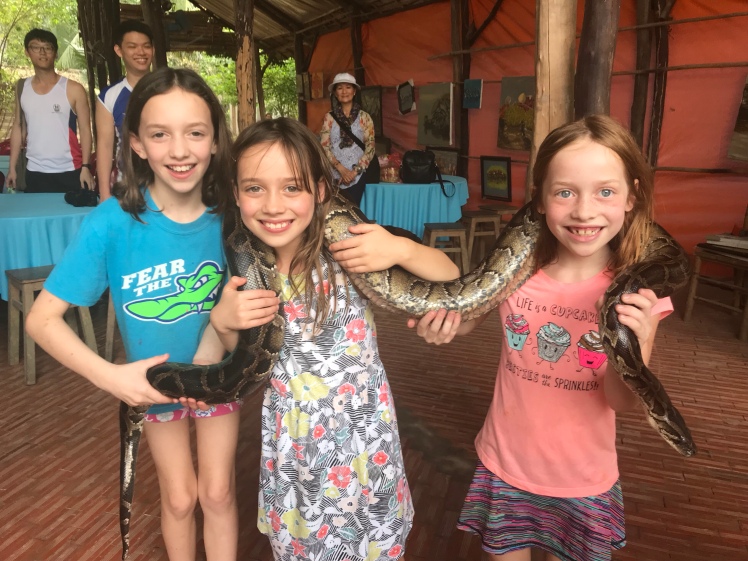 After we boarded our boat on the larger Mekong River we crossed over to an river island with a pomelo orchard on it to have lunch.  We had pork and didn’t spend the money to get the elephant ear grilled fish, maybe next time.  Once we finished lunch we boarded our boat again and crossed the remaining part of the river to the far side to join our bus for the trip home.  I was in awe about the amount of water was flowing in the river and it wasn’t even the wet season.  This wasn’t even the only branch of the river heading through the delta.  At this point it really hits home how important this river is to the region and how many people rely on the river for their livelihoods and their very survival.

Our last stop was a Pagoda and Buddhist temple near the shore of the Mekong.  They had several Buddha statues, the best was the happy sitting Buddha who represented the Buddha many years into the future where everything is good.  We learned that the Pagoda is where the monks pray and live while the temple is where visitors come and go but is not where the monks live. 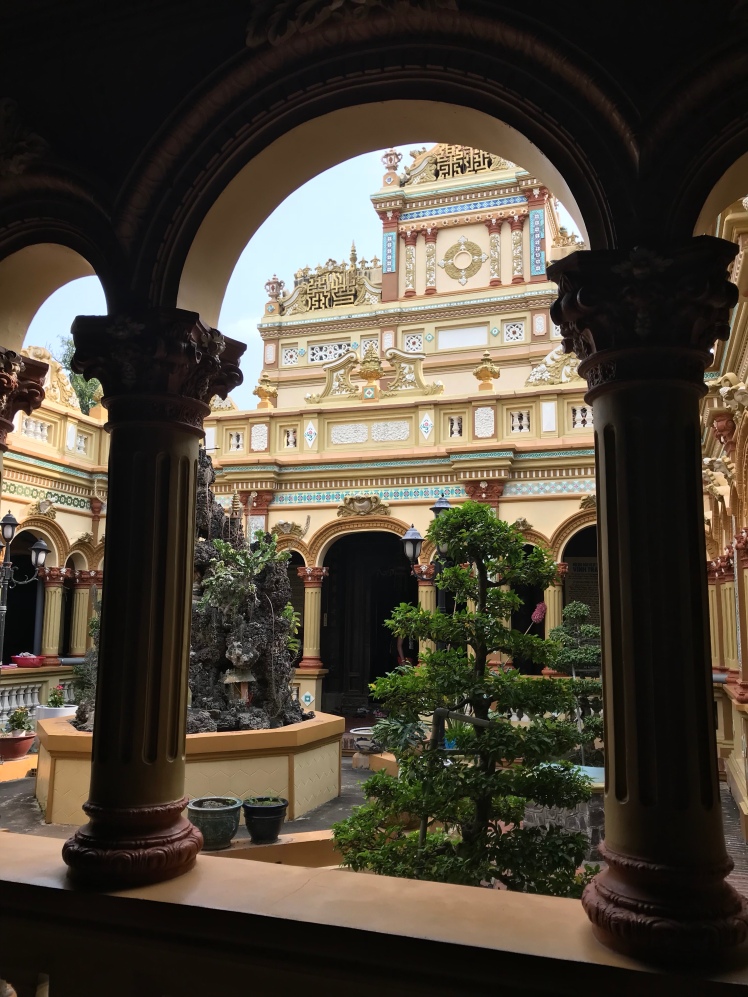 Once we boarded the bus is became apparent that we were really in holiday traffic, the amount of scooters on the road was incredible.  By the time we were supposed to arrive in Saigon we had run out of food for the kids and were starting in on the coconut candy, to hold off the impending meltdowns.  After almost scrapping paint with a half a dozen other vehicles and a few stops we arrived safely in town three hours late.

The Delta was our last visit to this amazing river but we did get to see three very different areas of the same river and the extraordinary civilizations build around it.  From the northern reaches in Laos, where the river meandered through the hills to the the stilt villages on the Tonle Sap and ending in the famous Mekong Delta.

2 thoughts on “The Mekong Delta”